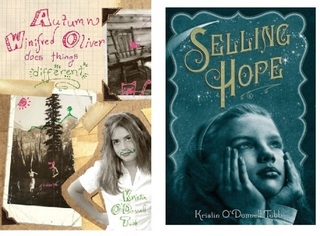 Kristin O'Donnell Tubb
Before I turn things over to this week’s fabulous award-winning author, Kristin O’Donnell Tubb, let me tell you why I especially love her first book, AUTUMN WINIFRED OLIVER DOES THINGS DIFFERENT (Yearling/Random House, 2008). When my brother and I visited my grandparents in Knoxville, we often drive into “the hills” to Gatlinburg (for my fellow Georgia residents, imagine Helen on steroids – lots of steroids). Even more special were trips into the Great Smoky Mountains, where my grandparents had hiked and explored back in the 1930s, and where we wandered barefoot through pebbly streams. For many reasons, the little village of Cade’s Cove at its entrance is a place I’ll always treasure.

Welcome, Kristin, and congratulations on such a successful writing career! In your delightful novel, 11-year-old Autumn becomes wrapped up in how the opening of a national park affects her small community. Autumn is definitely feisty! How long had you been living with this character before she made herself known on the page?.

The idea for Autumn came in 2002 when I was touring a log cabin in Cades Cove, which is now part of the Great Smoky Mountains National Park. I researched the book for a few years (while writing other projects, too!), and put the first words on paper in 2004 (for a First Pages critique at Springmingle, actually! :-) )

(Yea for SCBWI Southern Breeze!) What inspired you to set the story in the 1930s, on the brink of the opening of the national park?

I grew up in East Tennessee, a couple of hours south of Cades Cove, and visited the Cove many, many times growing up. But during that tour in 2002, it occurred to me that I was standing in a place that was once someone’s home. I wondered: how does someone’s home become a national park? When I did a little research, I discovered the fascinating history, and how families in the area were often misled when it came to the park. It felt like a story that I wanted to share.

How did you go about researching your story?

Oh, I could talk about research all the live-long day! (And, if I’m being totally honest here, I have!) I researched books, maps, websites, and did site visits. And then I struck gold: in the basement of Sugarlands Visitor Center near Gatlinburg, there is a library/museum that houses artifacts collected from the communities that now comprise the park. They have photographs, clothing, schoolbooks, church hymnals, farm equipment, ledgers – everything that makes a tract of land into a community. A distinct community. I spent days in that musty basement. (Anyone can, but you must make an appointment first!)

Was this the first novel you've written? Can you tell us a little bit about your writing process - regular schedule or lack thereof, good luck charms, etc.
(- I hear you love coffee and chocolate)!

AUTUMN WINIFRED OLIVER DOES THINGS DIFFERENT was actually the third novel I wrote. (The other two will likely never see the light of day. You’re welcome. ;-) ) Because I have two young children, I don’t have much of a regular schedule when it comes to writing (or life, for that matter!). I write when my youngest is in preschool, three days a week. But I “prewrite” a lot – I have a voice recorder app on my iPhone and I record ideas for scenes and characters that eventually find their way onto notecards. I LOVE using notecards for research and outlining. I’m a visual person, and spreading out notecards on the floor into a satisfactory story arc really helps me see the story. And yes, I fuel all of this with coffee and chocolate!

(I’m a notecard gal myself – and stacks of sticky notes!) Did anything surprise you during the journey from "idea" to "book"?

Yes. I think the biggest surprise on the journey from idea to book was how much I’d come to care for the characters. (There’s a “care” in there for a reason! ;-) ) It surprised me, writing scenes that would make me laugh out loud or cry. I’d experienced this as a reader, of course, but to experience it as the writer is a unique and very exciting experience. I think – I HOPE – that when a writer loves the story that much, it comes through to the reader.

I understand the book represented the state of Tennessee at the National Book Festival last year, and it has been nominated for the Tennessee State Book Award for 2011-12! That kind of affirmation must be wonderful. What kinds of reactions do you get from young readers?

It is wonderful to receive nods of approval, yes. I respect and admire librarians so much, so to have them like Autumn means the world to me. And nothing compares to getting emails from readers or doing school visits. Young readers are so honest and touching and funny. I’ve received artwork from readers that has made me laugh, and some that has made me teary. I answer and keep all the emails, too.

What keeps you going as a writer?

The readers. It is my goal to tell a story that readers will love.

And now you're right around the corner from welcoming your second novel, SELLING HOPE (Feiwel & Friends). Can you give us a sneak preview of this book, due out in November?

It’s May 1910, and Halley’s Comet is due to pass thru the Earth’s atmosphere. And thirteen-year-old Hope McDaniels and her father are due to pass through their hometown of Chicago with their ragtag vaudeville troupe. Hope wants out of vaudeville, and longs for a “normal” life—or as normal as life can be without her mother, who died five years before. Hope sees an opportunity: She invents “anti-comet” pills to sell to the working-class customers desperate for protection. Soon, she’s joined by a fellow troupe member, young Buster Keaton, and the two of them start to make good money. And just when Hope thinks she has all the answers, she has to decide: What is family? Where is home?

And here’s the first few paragraphs of the book:

Cross-Eyed Jane poked her head into the tent. Her kinky yellow hair puffed in after her.

“We gots fifteen more minutes with the tarot cards before she and Nick go on.” Cross-Eyed Jane addressed me as “she,” even when she was talking directly to me. This, coupled with the fact that she was cross-eyed, often made it difficult to know who Jane was talking about. But I was the only other person in the tent, so I assumed her “she” was me. I smiled.

Jane smiled back, her wrinkled face carving into deep ruts, and gazed over my shoulder. I moved my head up and to the left to where I thought she was looking, but those crawly eyes of hers crept right past me. Erm… left past me.

Huck. There it was – the surest sign that I needed to leave this vaudeville circuit once and for all: those awful wisecracks. I guess everyone has a little voice inside his or her head, pointing out all of the things that are funny and fantastical and odd. But my internal voice? Equipped with the kind of one-liner jokes that made vaudeville famous. Not exactly the conscience of your average thirteen-year-old.

I can't wait to read it, Kristin. Thanks so much for dropping by!

Thank you for inviting me, Robyn!

Please visit Kristin and explore the ways she "does things different" at her website, www.kristintubb.com , where you'll also find a link to her blog.

I LOVE the voice of Hope! I have to read this book for more of her jokes! (But I also love getting history, thrown in with the funny!)

Thanks for the wonderful interview, Robyn!

Thanks, Cathy! And of course, thanks, Robyn, for inviting me over to play! :-) Happy writing!