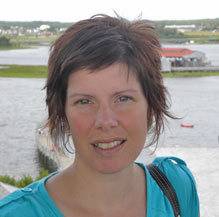 
I’m thrilled to welcome poet and editor Gisele LeBlanc today! She’s checking in all the way from the eastern part of Canada, where she writes poetry and has created and edited two online digital magazines, the most recent one being Berry Blue Haiku, which featured haiku and related forms for children.

You’ll find her own poetry (with the byline of G. R. LeBlanc) in contemporary haiku journals such as The Heron’s Nest, Notes from the Gean, Ambrosia Journal, and A Handful of Stones.

Berry Blue Haiku (the magazine for kids) is no longer publishing, but Gisele will be featuring a simplified version of it—which will be targeted at a more general audience— on her blog. We’ll get to that in a minute.

First, so glad to have you, Gisele! Tell us a little about yourself. Did you always want to be a writer?

Hi Robyn, and thanks for inviting me to your blog! Yes, I've always been interested in becoming a writer but only began pursuing it seriously after I had my son and was lucky enough to be a stay-at-home mom.

And, what appealed to you about being an editor? You jumped into this role with Dragonfly Spirit, correct? What kind of publication was it?

Yes, that's correct. After participating in several critique groups, I knew that editing was something I enjoyed, and I knew how difficult getting published is. I simply wanted to offer another market for children's authors. Dragonfly Spirit focused on short stories, poems, and articles for children. All the articles were geared toward writing and illustration since I believe that being creative in one's life is essential for the soul.

The magazine itself was a chance for me to use my own creativity, something I've always thrived on. I also wanted Dragonfly Spirit to help to inspire people to reach for their own dreams.

The experience brought me not only knowledge, but an amazing opportunity to connect with so many talented authors and writers.

How and when did you fall in love with haiku?

We published a few haiku in Dragonfly Spirit. I think that is where the seed was sown. From there I slowly began to learn more about the form and the more I learned, the more captivated I became. I still feel I have so much to learn about the genre—I'll always consider myself a student who enjoys sharing what she learns.

Tell us how the online magazine Berry Blue Haiku came about.

There is so much about the haiku form that I love, but the biggest reason I had decided to start Berry Blue Haiku was because I realized that there were no haiku magazines devoted to children. And, there is so much misconception about haiku.

In many schools, children are being taught a lot of misconstrued guidelines—a poem written in 5-7-5 syllables does not automatically make it a haiku and the 5-7-5 form is not required for a poem to be considered a haiku. I wanted Berry Blue Haiku to help dispel some of those misconceptions as well as to expose more people to the form and to inspire them to try to write haiku of their own.

I equate writing haiku to a sort of meditative practice, a way of slowing down and become aware of the present moment. Something we often overlook in our rushed day to day life. It's a practice everyone can benefit from.

And now, after four wonderful issues, can you tell us what’s in store for the future?

Well, we had decided to stop the magazine because it was getting too costly to run and a bit overwhelming to put together. A lesson I should have learned after running Dragonfly Spirit - but what can I say, I'm a sucker when it comes to something I am passionate about.

After some debate on my part, we had decided to put out a yearly anthology, but then my Senior Editor at the time, Michele Pizarro Harman, had to step down due to personal reasons and it nudged me into admitting that I needed to rethink the entire format and direction.

I decided to close down the business entity of Cobalt Crow Productions and start a blog where I could focus on haiku but not have to worry about deadlines, subscriptions, etc. The deadlines were causing me a good amount of stress as we were often scrambling to fill issues.

The new Berry Blue Haiku online journal will feature haiku every other day as well as interviews, educational resources, interesting links, etc. Everything will be appearing directly in the blog. Simple. Flexible.

Robyn, perhaps your readers would be interested in knowing who will be helping out with the new journal? Would you perhaps have any information you'd like to share about that? ;)

Aw, shucks. {grin} I'll be your assistant editor! I’m really looking forward to working with you. And hopefully some of our readers are looking forward to submitting poems. You share a great assortment of recommended books and links for aspiring haiku writers on the Cobalt Crow Productions blog, which is still active. Where/how do you recommend a beginner start?

There are so many wonderful resources out there, but I think the best way to learn is to read plenty of quality haiku and write a lot of it. I think beginners need to know though that there is a lot of published haiku out there that is sub-par, so it's important to follow journals and anthologies put together by haiku poets and editors who know the genre well.

Learning about haiku can be a bit overwhelming as there are different schools of thought when it comes to so-called "guidelines," and each person must decide for themselves which guidelines resonate with them. This is why learning the craft of haiku should be looked at as a journey.

Haiku is learned through experience. There are no short cuts.

I would recommend looking for resources and publications by Jane Reichhold—Jane has also made a few of her books available online for free, one of which is focused on women haiku writers. It can be accessed at the following link: http://www.ahapoetry.com/twwhbk.htm

Also look for material by William J. Higginson (The Haiku Handbook is a must), George Swede, Peggy Willis Lyles, Helen Buckingham, Alan Summers, and Patricia Donegan to name a few.

A few top-notch journals are The Heron's Nest, Notes from the Gean, Acorn, and Frogpond. The last two being journals I have still not been able to break into! ;)

Another wonderful place to learn is at The Haiku Foundation Forums: - http://www.thehaikufoundation.org/forum_sm/ - where you can post haiku for feedback. There are so many wonderful haiku poets who frequent the THF forums that are more than happy to share their knowledge and experience.

Readers will also find a digital library of haiku books at the THF website:

It's a great place to start the haiku journey.


Those are terrific resources, Gisele. Thank you. And thanks so much for dropping by! We’ll see everyone over at the
Berry Blue Haiku blog. And for the Poetry Friday Roundup today, please visit A Wrung Sponge.

Robyn, thanks for this informative interview. I will definitely check out the haiku resources. And best wishes on your new venture as assistant editor.

What a wonderful idea! I am so glad you've shared this with us. I can't wait explore Berry Blue Haiku more on the blog. One of the things that really bugs me is how poorly many schools do haiku. I am all for a better way to introduce it to kids!

Good luck with the new blog. I look forward to reading it.

So honored you all stopped by! Thank you for the kind comments and well wishes. And hopefully you'll send some poems over to the new blog/journal?

Thanks for the interview, insights, and great resources!

Thanks, Mary Lee! Gisele is terrific.

Aw, thanks, everyone! And as Robyn said already, I hope we see submissions from all of you!