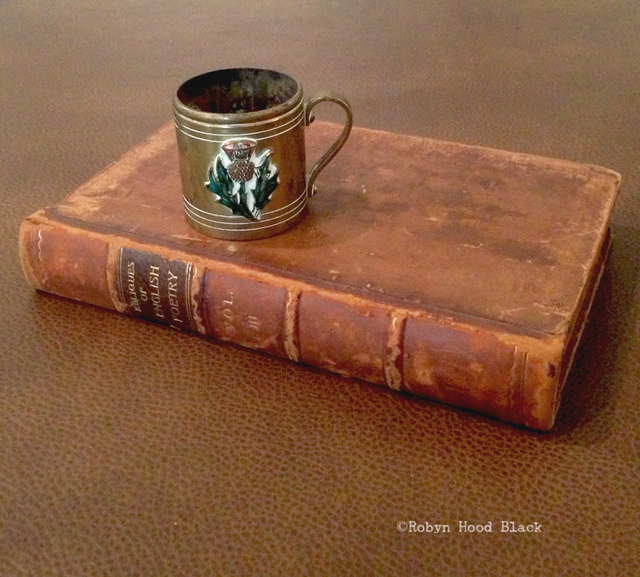 This summer has found me pining a bit for last summer, when we were traipsing around Scotland and Ireland and having a glorious time. Recently I came across a surprisingly fun poem in a nearly 200-year-old book I have, RELIQUES of ANCIENT ENGLISH POETRY: Consisting of  Old Heroic Ballads, Songs, and Other Pieces of our Earlier Poets; Together with Some Few of Later Date  (Sixth Edition, Vol. III, London: Samuel Richards and Co. Grocers' Hall Court, Poultry, 1823.)

Before you run off... in this current climate charged with all kinds of political hyperbole and braggadocio, I found some humor in these old words.  It's a tale of a battle between the fancy English and the gritty Scots at the border. Enjoy!  (I'll type in the introduction after the poem, in case you are as nerdy as I am and are interested. ;0) )

Sir John he got him an ambling nag,

To Scotland for to ride-a,

With a hundred horse more, all his own he swore,

To guard him on every side-a.

No Errant-knight ever went to fight

With halfe so gay a bravada,

Had you seen but his look, you'ld have sworn on a book,

The ladies ran all to the windows to see

So gallant and warlike a sight-a,

And as he pass'd by, they said with a sigh,

Sir John, why will you go fight-a?

His heart would not relent-a,

For, till he came there, what had he to fear?

Or why should he repent-a?

The king (God bless him!) had singular hopes

Of him and all his troop-a,

The borderers they, as they met him on the way,

For joy did hollow, and whoop-a.

None liked him so well, as his own colonell,

Who took him for John de Wert-a*;

But when there were shows of gunning and blows,

My gallant was nothing so pert-a.

For when the Scots army came within sight,

And all prepared to fight-a,

He ran to his tent, they ask'd what he meant,

He swore he must needs goe sh-t-a.

The colonell sent for him back agen,

To quarter him in the van-a,

But Sir John did swear, he would not come there,

To be kill'd the very first man-a.

To cure his fear, he was sent to the reare,

Some ten miles back and more-a;

Where Sir John did play at trip and away,

And ne'er saw the enemy more-a.

*John de Wert was a German general of great reputation, and the terror of the French in the reign of Louis XIII.

Here is the introduction:

When the Scottish Covenanters rose up in arms, and advanced to the English borders in 1639, many of the courtiers complimented the king by raising forces at their own expense.  Among these none were more distinguished than the gallant Sir John Suckling, who raised a trooop of horse so richly accoutred, that it cost him 12,000l .The like expensive equipment of other parts of the army, made the king remark, that "the Scots would fight stoutly, if it were but for the Englishmen's fine clothes." (Lloyd's Memoirs.)  When they came to action, the rugged Scots proved more than a match for the fine showy English:  many of whom behaved remarkably ill, and among the rest this splendid troop of Sir John Suckling's.

This humorous pasquil has been generally supposed to have been written by Sir John as a bantar upon himself.  Some of his contemporaries, however, attributed it to Sir John Mennis, a wit of those times, among whose poems it is printed in a small poetical miscellany, intitled, "Musarum Deliciae: or the Muses' Recreation, containing several pieces of poetique wit," 2d edition.  By Sir J.M. [Sir John Mennis] and Ja. S. [James Smith], London, 1656, 12 mo. (See Wood's Athenae, ii. 397, 418.) In that copy is subjoined an additional stanza, which probably was written by this Sir John Mennis, viz.

But now there is peace, he's return'd to increase,

His money, which lately he spent-a,

But his lost honour must lye still in the dust;

At Barwick away it went-a.

Hope that brought a smile! Here's hoping whatever "campaignes" you have yet this summer will be a success, and best wishes to those (like my Morgan) who are already back at school readying classrooms for a new crop of eager young minds.

Speaking of wonderful teachers, mount your trusty steed and charge over to My Juicy Little Universe, where the oh-so-brave and oh-so-smart Heidi has the Roundup this week!

John Suckling sounds like quite a character! Thank you for sharing this bit of wit with us today.

John Suckling sounds like quite a character! Thank you for sharing this bit of wit with us today.

Ha! Bragadoccio, indeed. The rhythm in this is fantastic. What a fun old poem...that's not too difficult to read as a modern person. the -a at the end of lines was great. It really added to the humor.

It's very fun to get a slice of ye olde spoken word after my steeping in current traditions at Chautau*ua last week. And I really love the idea that
if I want my meter to work or my ends to rhyme-a,
I add can I a wee little flip and an -a at any time-a!

Thanks for joining the Round Up this week, Robyn!

To find such wit is quite priceless, Robyn, and it's found so long ago. The more things change, the more they stay the same! It would be fun to see someone reciting this to an audience! Love "My gallant was nothing so pert-a." Thanks for the 'good morning' smile.

Thank you for the giggle this morning! Poor Sir John, at least his legend lives on in humorous poetry.

--Hi, Catherine - glad you enjoyed! It really would be funny to think he did actually write this about himself, but I'm doubtful... ;0)

--Linda, I thought so too - pretty easy to romp through, considering it was in a 200-year-old book which printed it as an old poem then! Thanks for romping along. :0)

--Heidi, Ho! We can all steal that trick any time-a! ;0) Thanks so much for hosting us all this week.

--Howdy, Linda - I agree! Would be very funny performed. I briefly thought about doing that for future school visits, but there's that one (hilarious) line that wouldn't quite work in an elementary school auditorium.... :0! Thanks for coming by!

--Kay, glad for the giggle! And, true - though it's not a flattering legend, but maybe he subscribed to "Any print is good print"...!

I enjoyed the intro too! BTW my husband and I have been watching the series "Outlander" have you seen any of it… I hope I make it to Scotland one day I'm fascinated by the country, thanks Robyn!

Robyn, this poem was so much fun to read and quite humorous to me. Thanks for sharing this treasure from another time.

--Hi, Michelle - we got to go to a couple of Outlander filming sites when we were there last year. (My daughter especially appreciated.) I managed to cross paths with Diana Gabaldon years ago at a couple of different literary conferences. :0) Thanks for joining the fun!

--Thanks, Carol - so glad this tickled your fancy!