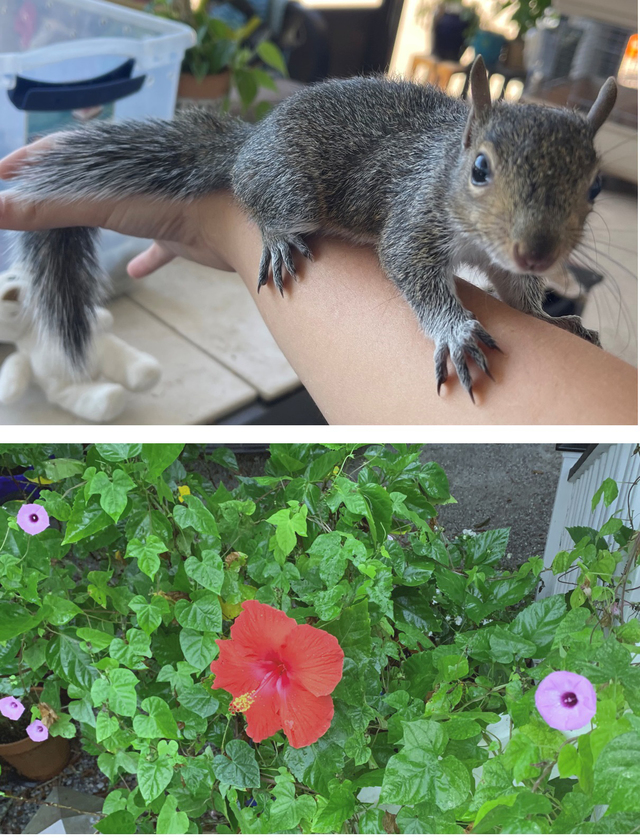 Just a couple of nice surprises this week, and another recent one.  I'm finding I appreciate those more and more….

Out of the blue I received an update on that baby squirrel I rescued a few weeks back.  (I blogged about that here.)  The wildlife rehabilitator who took the wee one on for the long term texted me this adorable picture.  And though I initially thought it was a 'he' – I was evidently wrong.  It's a SHE.  Here's what the rehabilitator wrote:

She is doing really well, no injuries - she just needs to be bigger.  Maybe a month and she will be released if it's warm out, but she is sweet.  I named her Robin.  It's funny because her adopted brothers are Pooh, Tigger, Piglet, Owl, and Roo, so Christopher "Robin" just worked.  Thanks for saving her.

Her unexpected update made my heart happy.

Another more subtle surprise recently is that the  rambling morning glory vine that used to confine itself to the back fence has journeyed to the side deck stairs and covered the wonky gate as well.  When we had two beautiful red hibiscus blooms this week, I decided to take a phone picture and also discovered the gentle purple flowers photobombing the larger plant.   If a plant can be effusive, that describes the morning glory vine here lately.

Finally, a surprise from a couple of months ago.  I was thrilled to open an email and discover an invitation to submit a bio and picture for The Haikupedia project over at The Haiku Foundation.

Haiku poet and editor Tzetzka Ilieva has been helping with this massive undertaking and explains it this way:  "The objective of this enormous project, initiated by Charles Trumbull and other members of The Haiku Foundation, is to create an online encyclopedia of everything about haiku."

I had heard about it and knew that noted poet, editor, publisher, and haiku historian Charles Trumbull was at the helm.  I was thrilled years ago when he was still editor at Modern Haiku and he accepted some of my work, along with offering an encouraging word or two, which I greatly appreciated.

Here's a one-line haiku of mine from Modern Haiku just a few years back:

You can learn more about Haikupedia here.

And here's my page there; I'm thrilled to be included.  [Also, very grateful to the wicked camera skills of Ginnie Hinkle, my son's girlfriend, for the new head shots!]

Here's hoping any surprises coming your way this week are pleasant ones. For inspiring poetic surprises, be sure to visit our amazing Irene, rounding up Poetry Friday for us at Live Your Poem.  Thanks, Irene!

Well, I guess you could call this a 'glory' of a post, Robyn. Congratulations for your being included in the "Haikupedia" and it is a special new headshot! I love seeing the pic of your special squirrel, also "Robin" and love your persistent morning "glory", have always thought it was such a special name for a flower. Happy Friday!

Congratulations on your inclusion in the Haikupedia! What an honor. Ginnie did a fabulous job on your new photo.

How nice to get an update on the squirrel! We live near a wildlife rehabilitation center and often get to see the squirrels in an outdoor enclosure when they are almost ready to be released. And there are many squirrels living on the grounds of the park where we walk. We're endlessly delighted by their antics on our lunch breaks.

ah HA! Robin the squirrel is doing well. That's great! I wish my only job was to get bigger. lol. And, hooray for haikupedia! I can't think of a more fitting place for your work. It does sound like. a daunting project. I'm proud to know you are in it. The morning glories...so brazen. And, so right in your haiku!

Robyn! You have a squirrel namesake! (Of course you rescued a squirrel.) I love the Haikupedia entry -- beautiful picture that is very much YOU. Congratulations on being included. xo

I'm so happy for that little squirrel. Such a happy ending. Thank you for sharing the Haikupedia site. What a wonderful resource. I have so much to learn. Your page looks great!

--Hi there, Linda B - thanks for the lovely comments all around. I agree about that fabulous floral name, and "persistent" is such a good word for them! Happy Weekending!

--Many thanks, Elisabeth! Love hearing about your squirrel-watching adventures. It would be dangerous for me to live next to a wildlife rehab facility; they'd be kicking me out of the gate every day. Squirrels are amazing little creatures, aren't they? So resourceful - and mischievous! ;0)

--Linda M., you are toooo funny! Thanks for the kind words . And I'm adding your "brazen" to Linda B.'s "persistent," and they both make me even more fond of morning glories!

--Many thanks, Irene - and THANKS for hosting us all this week in your fabulous poetic nest! XO

--Very kind, Janice - thank you! I've tooled around the Haikupedia site a bit and look forward to more explorations, especially as it continues to grow. Makes us realize how truly global haiku-love is!

Robyn, there are so many surprises and accomplishments at your post today. Congratulations on your new venture and the recognition you received.

What a sweet update on the squirrels! And thanks for the one-line haiku. It's intriguing!

--Thank you, Carol - I appreciate your coming by! Have a great weekend.

Thanks for sharing your lovely surprises!

Robin,
Congratulations on your inclusion in the Haiku compendium! That is a wonderful accomplishment! I love taking nature photos so the inclusion of the squirrel and morning glories are welcome additions! Thanks for sharing!

- Carol Labuzzetta @ The Apples in My Orchard

--Hi, Ruth - You are mighty welcome! Thanks for swinging by.

--Carol, thanks so much for visiting. It's easier to capture pictures when out and about with our phones now, isn't it? Even if they're just quick remembrances. Happy Fall!

So much goodness here! The rescue, the naming, the photobombing, the Haikupedia! Huzzah!

Look at you all 'squirrely' and encyclopedia'd! Love your surprises, Robyn, and the photo bombing flowers. :)

I loved reading your bio! And your one line haiku is so lovely. Morning Glories.....so true, even the fog or over night snowfall or bright sunrise or a grandchild's loving face.

Wait, wait, wait. There's a Haiku Foundation? A Haikupedia? This is one of the many things I enjoy about Poetry Friday: discovering information like this! Thank you. That is so sweet about the squirrel named Robin.

Goodness, there's a lot of goodness going on here! So happy to hear about your squirrel-save, and always so impressed by your haiku expertise and participation. OF COURSE you must be an entry in the Haikupedia! You should offer a course.... Wait, have you already offered a course and I missed it?😊

—Hi, Janet - Thanks so much. And I LOVE the beautiful “surprise” entries on your list…:0)

—Glad to be of service, Susan! ;0) Thanks so much for coming by and for joining in all the PF fun!

—Very kind, Heidi. I have taught an online class or two but maybe need to revisit that idea down the road… Thanks!