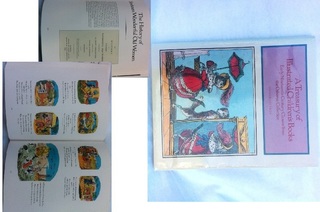 Over Mother's Day weekend, my family travelled to Beaufort, SC - recently named America's Happiest Seaside Town by Coastal Living magazine. I was magnetically pulled into a wonderful little bookshop, where my daughter Morgan quickly found a large, hefty volume to put in my hands: A TREASURY OF ILLUSTRATED CHILDREN'S BOOKS - Early Nineteenth-Century Classics from the Osborne Collection by Leonard de Vries (Abbeville Press, 1989). Despite its equally hefty price tag, I didn't protest too much when the family suggested it as a Mother's Day present. In fact, I ventured to ask the proprietor for a Mother's Day discount, and he even obliged! Very kind.

I'm quite the sucker for these volumes chronicling early children's literature. (I posted about that on my art blog earlier this year, here, after Tabatha's gracious gift along these lines during our December poetry/gift swap.)

Here are the opening sentences from the jacket flap:

This beguiling volume reproduces thirty-two of the most enchanting English children's books, dating from 1805 to 1826. That brief period - sandwiched between the harsh didacticism of earlier centuries and the refined moralizing of the Victorian era - witnessed the first flowering of children's books meant to delight and amuse rather than simply to instruct.

Because Liz Steinglass inspired a limerick-laced spring over here, I was particularly delighted to discover two collections in this volume. From p. 223:

...Today the name most commonly associated with the limerick is that of Edward Lear (1812-1888), whose Book of Nonsense (1846) has inspired many imitations. But the limerick came into being at least two decades before Lear's famous book, and one of the earliest appearances of this delightful verse form is The History of Sixteen Wonderful Old Women, published by Harris and Son in 1820. ...

Here are a couple of examples:

There was an Old Woman at Glos'ter,
Whose Parrot two Guineas it cost her,
But his tongue never ceasing,
Was vastly displeasing;
To the talkative Woman of Glos'ter.

There lived an Old Woman at Lynn,
Whose Nose very near touched her chin.
You may well suppose,
She had plenty of Beaux:
This charming Old Woman of Lynn.

And here's one from "Anecdotes and Adventures of Fifteen Gentlemen." The final word is not printed in the reproduction, so I'm relying on my own poetic license for it - kind of like the limerick challenge on "Wait, Wait Don't Tell Me" on NPR.

An old gentleman living at Harwich
At ninety was thinking of marriage
In came his grandson
Who was just twenty-one,
and went off with the bride in his carriage.

(I'm assuming it was carriage!)

Today's poetic fare was light, though our hearts are heavy for those in Oklahoma this week. Continued thoughts and prayers for all affected by the tornadoes and other recent tragedies across our country.

For all kinds of poetry today, please visit Alphabet Soup, where our wonderful Jama is serving up the Roundup and some mango-laden poetry and bread! Here, take a napkin before you go - it's really juicy....
Read More
23 Comments

I love discovering old gems of books like these! It's interesting to see what people were writing about, and how they were writing it. I hope you share some more poems from them!

Hi, e - thanks! You'd enjoy all these illustrations. The author quotes Iona and Peter Opie: "The children's books produced in the first quarter of the nineteenth century have an alertness and grace not achieved in any other period."

Matt - howdy! Thanks - I told my family when we purchased the book, "I'll be able to borrow more than one blog post from this!" ;0)

I love those old children's books too! What fun limericks you shared today. My favorite is the woman with the long nose :). Also cool that you got a Mother's Day discount!

Robyn,
I swear limericks are as bad a potato chips.
What a treasure! I want to see it. I love finding old poems and writing. Thanks for sharing. I hope you'll share more.

Jama, thanks for popping over and for hosting today! (And I figured it couldn't hurt to ask - very nice man.)

Liz, you're the one who opened the bag this year. ;0) I'll share more, for sure.

Fun! I had a teacher once who loved to have us memorize and recite these old limericks..I hated it then, but feel so differently now!

Thanks, Tara - There are several things I remembering not enjoying as a kid that I love now. ;0)

Thank you for this fun post! I am such a limerick fan, with very fond memories of sharing them with my grandfather. It's fascinating seeing these classics. Just this week I went to my old friend the limerick in an effort to perk up the home page on my website--so that made the timing of your post extra fun for me. Also, I just love the word "beguiling" in that jacket copy.

Karin - Thanks for visiting and for sharing those wonderful limerick-y stories! I'll go check out your home page. (I also can't resist the word, "beguiling..."!)

Very cool Treasury - the perfect Mother's Day gift! I love the limerick about the grandson riding away with the bride. Too funny! Thanks for sharing these with us today! =)

You inspired me to pull out "The Illustrated Treasury of Children's Literature" (edited by Margaret Martignoni) that's on my shelf...a present from someone or other for my kids many years ago. It's got a few Lear limericks (along with Lear's illustrations--I did not recall these at all.) And also a nonsense alphabet illustrated and written by him. Thanks for inspiring me to take another look at this treasure. Enjoy yours!

I think you're right, Robyn -- I'd give you Carl Kasell's voice on your answering machine for that limerick ending :-) Glad you had such a nice Mother's Day weekend!

Bridget - that was one of my favorites. Poor Grandpa! Thanks for coming by. :0)

Hi, Buffy - Well, if I caused you to give up some other productive pursuit today and enjoy a few pages from one of these kinds of "Treasures," then my work is done. ;0) Glad you enjoyed.

Tabatha, why thank you! That show is addictive, isn't it? And I've always loved the idea of that special prize.

Lovely old book - I love coming across finds like that! Love the old limericks. Thanks Robyn!

Thanks, B. J.! I know. When my daughter handed me this book, I knew I was in trouble...! And it's fun reading some "pre-Lear" limericks.

How fun! Thanks for sharing your gift!

What a great gift, indeed! These are a hoot. I have a friend who lives in a tiny town in Wales that is full of these "Old Woman" types. Her boyfriend wrote a book of limericks about the women of Hay and is trying to find a publisher there. Apparently, however, the women of Hay are not pleased!!!!

Ah, the magnetic pull of the bookstore! I know that feeling!! (Maybe it was that particular book that was pulling you in, knowing that you would properly love and appreciate it!!)

Renee, ha! What a great story. Well, good luck to our Limerist (?) of Hay!

Hi, Mary Lee - that's a lovely thought and I will ascribe it to my new bound treasure. :0)

What a great find! Nothing like a bit of 19th century shenanigans to make your Mother's Day complete. The old woman of Glos'ter was my favorite from this bunch... I can't wait to hear more!

Michelle, many thanks for coming by! Some of these old verses are really clever. Will look forward to passing along more down the road. :0)