Poetry Friday: Of Squirrels and Skies 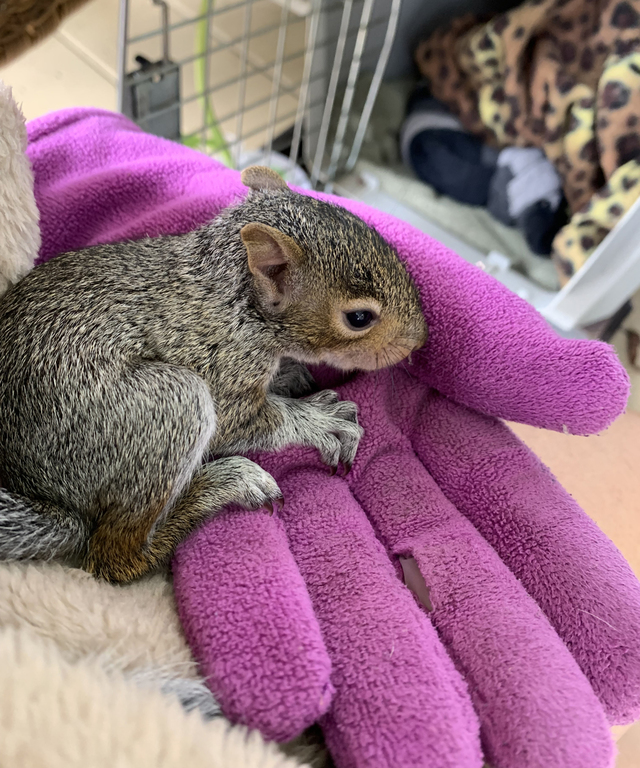 Greetings, Poetry lovers! A different kind of post this week...

Maybe my father-in-law, who passed away a year ago July and whose birthday is today (Sept. 10), was playing a little joke.  How else do I explain the baby squirrel that fell right into my path on my gravel driveway Wednesday afternoon? Poor thing clumsily ran a few feet and collapsed beside a big potted rosemary bush.

Twenty years ago, on Reuben's birthday and the day before 9-11, I was picking up then-six-year-old Seth from their house late in the day, and grandfather and grandson greeted me with a surprise – an injured baby squirrel.  Somehow I managed to keep the little guy alive overnight (its eyes weren't even open yet). When horror upon horror struck the next day, I became determined that while the world might be falling apart, I was not going to let that helpless creature die.  (That squirrel's story had a happy ending; After keeping him through the winter, we released him the next spring.)

So on Wednesday this week, I was immediately transported back to that haze of days.  This time, the squirrel was a little older (about six weeks old), but I feared, worse off. It wasn't moving, and I could see blood on its nose and mouth. Its eyes barely opened and closed.  It was on soft grass, so I let it be.  Mama Squirrel didn't come. Checking on it again, I noticed some large ants in bothering range.  Then some drops of rain.  Though I still thought the creature might quietly exit the world, I couldn't just leave it there to suffer with harassment and rain.

I wrapped it in a blanket and put it in a tub in a box under the carport.  I tried giving a bit of Pedialyte in a dropper, but it wouldn't swallow. Soon enough, storm system Mindy's outer bands lashed our area for two straight hours, with near-constant lightning, sideways wind, and unreal amounts of rain.  When it was finally safe enough to venture out, I was afraid to look in the tub.

The wee thing was curled under blankets in the corner – a bit cold I'm sure, but not too worse for wear. I transferred it to a small crate and put it on the screened front porch (and tried a little liquid again). It still had a bloody nose, but I was beginning to wonder if that was actually from hitting its face when it fell rather than some massive internal injuries.

I headed out to PetSmart and Walmart for puppy formula and a tiny pet nursing bottle, and a cheap warm blanket to cut up for more layers.

Trying to remember what had worked two decades ago, I mixed both substances (later reading that you are actually supposed to use only the rehydrater first). I was equipped with syringes and the little bottle. After some persistence on my part, I was amazed when the little animal took the bottle, grasping it with front paws.

I also heated a sock full of raw rice in the microwave, put it into another sock, and placed it in the crate. This helped keep the baby warm from time to time.  Mostly, it just wanted to sleep.  Which I didn't do much of that night.

Rising long before sunrise, I checked on my snoozing charge.  It didn't rouse much to drink, so I tried again later.  Mindy, in the meantime, sent more rain, flooding a few streets and our entire back yard. Couldn't blame the little fella (finally ascertained that) for wanting to burrow and hide, but with some coaxing I was able to get him to drink a bit more.

This season-of-life time around, I realized a busy little city neighborhood was not the best place to hand-raise a squirrel.  All those years ago, we had 12 acres and two sets of extra little hands to help. So from our vet's office, I got the name of a wildlife rehabilitator in our area.  (Technically, there are laws here against keeping squirrels without a permit anyway.  But getting them to a rehabilitator is okay.)  The kind voice on the other end of the phone and I met up at a shopping center, and she graciously took on another misplaced baby. She already had others she was rearing, and had received a copule of new calls after the storms.

It was hard letting him go, but a family farm on two acres with a competent caretaker was definitely the best thing for my furry September surprise.  I so appreciate folks who volunteer to care for needy animals.

Thanks for reading this epistle;  I'll keep the poems short.

as ten years ago

And, here, an excerpt for September 10 by Percy Bysshe Shelley in THE ILLUMINATED BOOK OF DAYS, edited by Kay & Marshall Lee (G. P. Putnam's Sons, 1979):

In Autumn, and a luster in its sky,

Which thro' the Summer is not heard or seen.

As we all pause to remember this weekend, my hope and prayer is for harmony and lustre in the days ahead.

Thanks to the ever-talented Tricia for hosting the Roundup this week at The Miss Rumphius Effect.

What a beautiful post. I love how you rescued the squirrels and how they needed that just now when we are all tender with memory. And, oh my....that simple phrase...empty sky. It's such a strong reminder. I hope today is filled with lovely memories. Each one a blessing to you.

Timing is perfect, Robyn. And what a precious wee small fluff it is. Thank-you for sharing.
Your haiku from 2011... 💔 (As powerful now as it was then.)

What a squirrel story! Great photo. I'm glad you had a place where you could entrust the baby for good care. Thank you for giving us a chance to revisit your haiku. xo

I love both squirrel stories and the reminder that we should do whatever we can to heal the world. Every little bit helps.

So glad that the little squirrel was able to go to a place that will be able to care for him until he's able to be released. I've always found a comfort in nurturing life when confronted with the harder side of life.

The last line of your poem - about empty sky - is so poignant. Thanks for sharing this today.

You did a good deed indeed and I can empathize with your desire to do your best to not let that little creature die if you could help it. Lovely haiku, Robyn.

Of all the details we remember, that "empty sky" is a huge one, Robyn. I love your sweet story saving that baby. Serendipity with your birthday remembrance, too! One of my uncles saved a baby once & while when grown it went off on its merry way, it returned often to greet everyone. Thanks for a beautiful post. I'm glad the storms weren't too, too bad for you.

Oh what a bittersweet story, Robyn, A message from your father-in-law indeed. It's hard to fathom it's been twenty years. A friend pointed out that for our parents twenty years from Dec. 7, 1941 was 1961, and the changes. For me, 9/11 will forever be etched in my mind. Thankful my cousin relatives were not in NYC that day as they could have been,

--Hi, Linda - Many thanks, for the comment and the kindness. Sweet memories indeed. Wishing all the best to you and yours throughout this month.

--Thank you, Kat - The blueness of the sky - on 9-11 and again on that decade anniversary - will always stay with me, I'm sure.

--Hey there, Tabatha - thanks. And no lie, I got teary watching the little fella go! But very thankful to have been at the right place and the right time to intervene when he needed it.

--Such a lovely way to put that, Mary Lee. You've done lots of healing and no doubt will continue that good work in new forms and new adventures!

--Many thanks, Elisabeth. Probably never a convenient time for such an "interruption," but experiences like that help put everything else in focus, don't they? Warmest wishes to you!

--Hi, Janice - I would imagine any of our PF contingent would have done the same thing! Such a caring group of humans. Thanks for the nourishing words.

--Howdy, Linda - thanks for the feedback, and glad you enjoyed the squirrel drama! Love the story about your uncle's experience. The rehab person yesterday told me that her released squirrels like to hang around and visit (& find food!) after they're back in the wild, too. Very social creatures they are.

--Wow, Jone - sometimes I think of years in that way (wondering what the passage of time was like for folks at different points in history), but I hadn't calculated that particular spread... 1961 was between the year my older brother was born and the year I was born. And I think of WWII as being so WAY before that, but it wasn't. Grateful your family escaped the tragedy that day. So many brave and heartfelt stories from those who lost loved ones. Definitely a defining moment for more than one generation.

That’s quite a story, Robyn. I love the Reuben coincidence and all the details that help to show how each of experiences and processes big traumatic events in our concentric and rippling circles away from ground zero. That haiku beats repeating!

I love the squirrel story! And that haiku...

Robyn, I love that you nurtured the helpless squirrel. The poems you shared are so appropriate. The luster of autumn is starting to pop in Virginia. Peace to you.

--Heidi, Thanks for coming by - "concentric and rippling circles away from ground zero" - such a powerful image of this national tragedy. And, 15 verifications? Good grief - how many pictures of bridges and crosswalks are there in the world?! Thanks for persevering!!!

--Thanks, Ruth - glad you enjoyed, and I hope things are more peaceful than not your way, in a place grappling with so much this (and many) years.

--Carol, I hope you are enjoying fall in a new place! Your perceptive eye will not miss any beautiful detail, I know. Thanks for visiting over here.