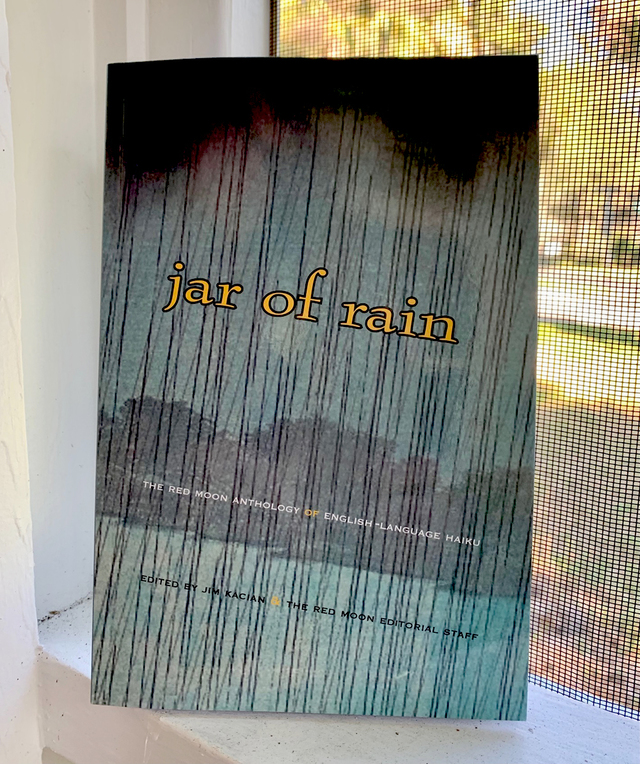 Lots of haiku goings-on this past week, which is great with me.

First, on Tuesday and Thursday, I presented an online two-part haiku workshop for the Oconee Cultural Arts Foundation (OCAF - near Athens, Ga.), and I loved meeting the most interesting people who participated!  Our own Carol Varsalona was there, as well as other accomplished, fascinating, curious, and generous individuals.  David Oates, who lives in Athens, made the first workshop - tuck that name into your hat for later as you scroll down.

Second, I've been letting a commitment simmer for a while and am now ready to stir it into something.  A long-distance friend and accomplished haiku poet asked me last year if I would write the foreword for a sparkling collection of her work.  It's the first time I've written such!  I hope to do the fine quality of her poetry justice.  Such an honor!  I'll share more when she publishes her book.

Third, I'm way beyond thrilled to have a poem in jar of rain,  the brand new Red Moon Anthology of English-Language Haiku (edited by Jim Kacian and the Red Moon Editorial Staff).  It's the 25th volume in this annual series, and a standard for excellence in haiku circles.

From the back cover copy:

The Red Moon Anthology of English-Language Haiku each year assembles the finest haiku and related forms published around the world into a single book.  This volume, twenty-fifth in the most honored series in the history of English-Language Haiku, comprises 163 poems (haiku and senryu), 20 linked forms (haibun, renku, rengay and sequences), and 6 critical pieces on the reading, writing and study of the genre.

Jim Kacian writes in the introduction that it's the "unofficial yearbook" of English-Language Haiku - a great description.

Over the course of 2020, more than 3,000 haiku (and related works) by more than 2,000 authors from around the world were nominated for inclusion. Eleven editors read these.  Then the works were placed anonymously on a roster sent to each judge, and five of ten had to vote to include each piece.  (The editor-in-chief sat out this last part.)

About five years ago I had a poem included in the RMA by default, because it won honorable mention in a Haiku Society of America contest.  But this is the first time a poem of mine got plucked right out of the haiku universe, so to speak.

The reason I told you to tuck David's name under your hat is that he has a poem in this volume as well, as do some other poets whose work has graced the pages of this blog over time.  David granted me permission to share his poem, so here are both of ours:

two dates by every name

the children in the pictures

I love these Red Moon anthologies, because not only do they offer a sampling of fine haiku from across the globe, they hint at what was going on the world any particular year as well.  Most entries in jar of rain are pretty timeless/universal (as I suppose David's and mine are), but there are also pandemic-themed poems and linked verses.

The gorgeous cover, by the way, is a detail of a woodblock print by Hiroshige, Sudden Shower over Shin-Ohashi Bridge and Ataki (1857).

You can peruse the many offerings of Red Moon Press here, specifically jar of rain here, and learn more about David and his various creative adventures (including Wordland, his streaming show on UGA's public radio station) here.

What an exciting week you've had, Robyn. And joy, seeing our lovely Carol. I can only imagine what an inspiration and delight the Red Moon Haiku Anthology is. It sounds like a symphony of sighs. Huge congratulations on your success. Your poem is perfection!

--Thanks so much, Dear Kat - I can't wait to learn more about your brand-spankin' new picture book when you host us next week!! (And, actually, we had a discussion in the workshop on Thursday about a well known cow haiku by Issa... - ;0) )

Thank you for sharing these poignant poems, Robyn. You are always in such wonderful publications and doing such interesting things. Go, you! xo

--Very kind, Tabatha - thank you! I can't keep up with YOUR level of cool endeavors, but I sure enjoy reading about them. (My poem was written after Jeff's folks had to move from their house to assisted living just over a couple of years ago. We've lost both of them now - the time does go fast, and we need to cherish it, don't we?)

What a wonderful week, Robyn - and the delight I feel reading both yours and David's haiku has added wonder to my day today. Thank you!

I'm glad your workshop went well, I hope you have another. I couldn't attend this week. Congratulations on the anthology! What an honor to be chosen! And thanks for the two haiku that I can wonder about today.

--Thank YOU, Sally - hope you have a wonderful weekend!

--Hi, Janice - We had a great time, so perhaps I can offer another at some point, or get brave and do one on my own? I appreciate your coming by - and love that you and Sally both felt inclined to "wonder".... Enjoy your weekend!

Such wonderful news, Robyn. I am so proud of you & this new honor. I love the title "Jar of Rain", will check out others through the link, too! Thanks, and many congratulations to you.

--Thanks so much, Linda. I LOVE that title, too - it is from a very poignant haiku included. (I don't personally know the poet and didn't take time to figure out how to reach, so didn't get permission to share - but a beautiful haiku.)

Congratulations on being selected for the Red Moon Haiku Anthology!! Lovely to read both your and David's poems. Happy to hear about all your recent events :).

Such an honor - so cool! And I love both of these, well done!

--Hi there, Jama - many thanks! I've been enjoying reading the variety of selections. Another former HSA SE member/regional coordinator, Terri French, has a wonderful haibun in there, too.

--Glad you enjoyed, Matt. Thanks for the kind words!

Congrats on your publication. I will look for jar of rain. Hope your workshop went well.

Thanks, Jone - and thank you for letting me share some of your lovely work! Folks enjoyed... :0)

Congratulations! You inspire me!

As for your haiku...oof. That was a gut-punch. Been there, done that. It's been 4 years and we're still in sorting/dividing mode...

Robyn! A gentle rain of Wonder Full here. Much to splash in.

1/ Brava! for the intro invite. I understand the awe & shiver in approaching. Will send you paper mail about my 1X similar experience which did smooth out as yours will.
2/ both your & your pal's poems sear me so beautifully
3/ your workshop! hope this repeats when my terestial path aligns more with your teachings
4/ happy happy weekend

at my blog we are celebrating Feb. for 3 special reasons & others, uncountable.
hugs & xo always
~ Jan/Bookseedstudio

Two fabulous haiku. Thought-provoking and so deceptively simple. Congrats on your inclusion, Robyn! I'd like to spend more time on haiku...

Woo hoo! So many good things going on this week. Both your and David's haiku speak so eloquently to grief, universal, but even greater this year.

What a wonderful post! Thank you for all the teachings of haiku and resources you offer. I love it!

--Thank you so much, Mary Lee - and, it's beyond tough for sure. (I love haiku because it helps me express the hardest things that I wouldn't normally put into words.)

--Jan - arm-fulls of thanks for all. Am looking forward to learning about your foreword-ing experience! Thanks for your clever poetic response, and all these goodies. "sear me so beautifully" is a gorgeous line itself..... Looking forward to visiting your post when I make my own rounds later today! (I'm always fashionably late - ha!) XO

--Thank you, Laura - your love of/experience writing short poems would be an asset in the haiku pond, for sure!

--Hi, Kay - thanks for coming by and for that thoughtful feedback. Yes, just the sheer numbers of losses in this past year are staggering. Poetry helps us all.

--Linda M., your enthusiasm is always contagious! Thanks for coming by and as always, for you adventurous literary spirit.

So much wonderful news, Robyn! Congratulations. I'm always blown away by the power of haiku. Your cold house haiku is so deeply moving.

--Many thanks, Molly. I find I'm a better human when I'm making time to read and write haiku. Have a great rest of the weekend.

Oh, Robyn, what an honor to be in Jar of Rain (I so love that name) — congratulations! Your haiku is so poignant, as is David's. I love the way haiku packs such a powerful punch in such a compact way. An amazing form.

Many thanks, Karen - glad you enjoyed these. We all appreciate your hosting this week! :0)

Both of these are so lovely. Thank you for sharing them! And congratulations on writing a foreword!

--Many thanks, Ruth - have a great week!