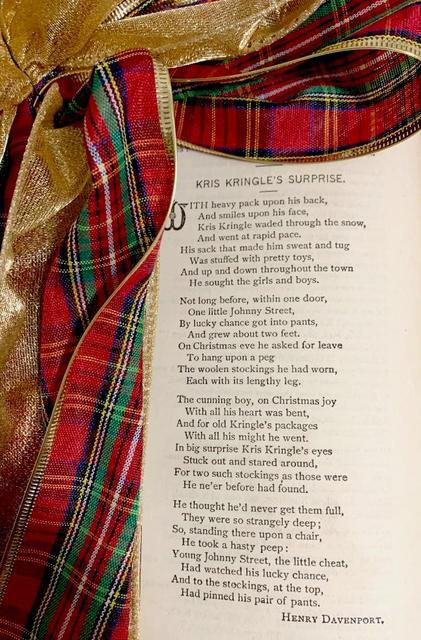 I hope your holiday season is filled with sparkle and light, at least here and there and in surprising places. I've been up to my elf-ears in Etsy orders (not complaining!) and so have been running on coffee fumes for the past week or two. I'm still listing items online, and on the home front, today is our First Friday that is also the "Night on the Town" downtown. Shops stay open with grown-up refreshments and such, and there is music, sometimes puppets, and general family holiday merriment on the streets, with the lighting of the Christmas tree and stirring music by US Marine Corps Band members. I have much to do to get my wee little shop ready!

Since I'm currently immersed in my favorite things - art supplies and old books - and since I've no free space in the ol' brain for anything too profound or complicated this week, I peeked around for something old and fun to share today.  In one of my volumes of CROWN JEWELS, I found a poem I hadn't stumbled upon before.  I hope it brings a chuckle!

It's from CROWN JEWELS or Gems of Literature, Art and Music Being Choice Selections From the Writings and Musical Productions of the Most Celebrated Authors From the Earliest Times (etc. - it actually goes on and on!), compiled by Henry Davenport Northrop, D. D., and published by W. J. Connaton, Kansas City, in 1888.

With heavy pack upon his back,

And smiles upon his face,

Kris Kringle waded through the snow,

And went at rapid pace.

His sack that made him sweat and tug

Was stuffed with pretty toys,

And up and down throughout the town

He sought the girls and boys.

Not long before, within one door,

By lucky chance got into pants,

And grew about two feet.

On Christmas eve he asked for leave

To hang upon a peg

The woolen stockings he had worn,

Each with its lengthy leg.

The cunning boy, on Christmas joy

With all his heart was bent,

And for old Kringle's packages

Stuck out and stared around,

For two such stockings as those were

He ne'er before had found.

He thought he'd never get them full,

They were so strangely deep;

So standing there upon a chair,

He took a hasty peep:

Had watched his lucky chance,

And to the stockings, at the top,

Had pinned his pair of pants.

Now, take your mischeivous selves right on over to fiction, instead of lies, where Tanita is rounding us up today.  Thanks, Tanita!

What a lovely old book, and a cute poem. It's great to be busy, but thanks for taking time to share a poem today.

Funny poem! Happy Holidays to you!

This book looks gorgeous and that poem is hilarious.

Thanks for sharing! And what a cunning young lad!

I love the poem and the presentation, Robyn. Good luck with all your merriment!

Desperate kids call for desperate measures, right? Ha! This is a wonderful old poem, have not seen it before. Thanks, Robyn! Wishing you a fabulous 'First Friday' with all the trimmings, I guess!

Oh, your elvish busyness is a delight. I am heading to your shop. May your season sparkle and shine,

tee hee! pants! Fun and funny. I hope you are having a busy holiday selling all your beautiful treasures. Great post. Put a smile on my face.

Haha... quite a little cheat! Thanks for sharing that. I reminds me of a story my sister-in-law told, of how she hung two stockings one year, in hopes Santa would fill both. Instead, she got coal in one. A lesson learned, no doubt.

Hello, all you beautiful spirits and sprites - thanks for the fun comments and good wishes. ( We had a super-busy First Friday last night, and still hoppin' today! Tired, but very grateful over here....). Karen, your sister-in-laws's story is hilarious - thanks for sharing!
--* Holiday hugs all around! *--

Yeah...I don't think it would pay in the long run to cheat Santa! Little Johnny might have gotten away with it in the short run, but we never hear what befell him later... :-)

Thanks for the chuckle, Robyn. I don't imagine the prank got much of a heeheehee out of the hohoho man, though. :) Happy Etsying to You! xo

Mary Lee, thanks for coming by. And, true - those pants would also hold a bunch of coal, or a long list of chores.... ;0)

Glad you enjoyed, Michelle! Still covered up in orders; not complaining. Always happy to help fill a stocking or two! XO