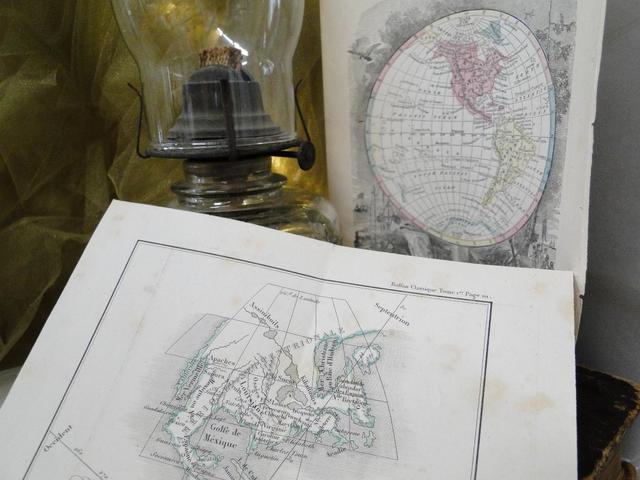 Greetings, Poetry Lovers!  It's been a poignant week for any thinking, feeling person, hasn't it?

[Quick, less-serious forward:  While keeping a close eye on the news, I've also been getting ready for an event on a much lighter note - our little downtown, after skipping First Friday for April and May, is holding a VIRTUAL First Friday this week.  Our merchants association is sponsoring a Facebook Live whirlwind tour of more than two dozen businesses from 6 to 8 p.m.  - So YOU can even join in from your couch!  (Here is a link to my own little promo for it; I'm slated to have my two minutes of fame in the middle-ish of the event.  The event will be posted as a Facebook Live tour on the Downtown Beaufort Merchants Association Facebook Page.)]

I've been making several items using images from my miniature antique map problem - er, I mean - collection.  So I've been entertaining maps in my mind and imagination these last few weeks.

Thursday, when I was able to see some of the the moving service for George Floyd, I pondered several map-themed ideas for a haiku that might reflect these fraught but energetic times.

I re-wrote this in my head and on scratch paper many times.  My first attempts were too preachy, which is quite un-haiku-like.  Too much of my own voice (however well-intentioned) was apparent.  I knew I wanted to include "legend," because of its double meaning.  Other than that, I didn't want to include blatent references to my own feelings, or admonitions to do anything, or other burdens.  It was a good exercise in narrowing my focus, trying to shed my own interjections to focus on the images.

When I first started my art business, I was delighted to find a late 19th Century Geography textbook/atlas in an antique shop (the first of a few I have now).  I was appalled, however, when I actually read the text.  I won't dignify the discussions of various "races" by sharing them here. But I think of the horrible influence of that polluted thinking - it seems so long ago, and yet that particular book was published only a dozen or so years before one of my grandfathers was born.  It wasn't really so long ago.

Just before Covid-19 stay-at-home orders, I had a meaningful encounter in front of my own house, in our fairly diverse downtown neighborhood which I love.  You've gathered from my pictures that I'm white; so is my husband, and our kids.  This incident involved a couple of young African American men (maybe slightly older than my own kids), car trouble, and some agitated behavior that frightened me.

Long story short, I was initially tempted to call the police - one young man was pushing and shoving the other, yelling, pacing wildly, coming toward the house.  I decided to try not to overreact - to pray instead, and to listen to my Mom instincts and intuition during some tense moments when he made contact.  Seth was here for a visit. (Seth, who was born one month after Trayvon Martin, and with whom we never had to have "the talk.")  With Seth's calming presence and real-world de-escalation experience, I asked him to come outside too.

Jumper cables.  That's all they needed.  The young man calmed down, apologizing for his initial behavior - and I tried to convey it was the potential fighting I was concerned about.  The other young man, the driver, never lost his cool with his friend, however, or with the situation.  Seth got their engine running, and everything was fine.

We stood and talked for a little bit, and the young man asked for a hug, which I gave both of them, of course. He smelled of alcohol, though it was morning, and I wondered about his struggles.  Perhaps that fueled some of his initial behavior.  It also might have let his guard down in conversation, because he said, "You don't know how hard it is for us to ask you for help." That broke my heart.

Many hearts have been broken, these weeks, these years, these centuries.  I cannot speak for anyone of color.  But I do hope we can all heal, together, even if slowly, following that arc that bends toward justice.

Our wonderful Margaret has the Poetry Friday Roundup today at Reflections on the Teche.

Thank you for sharing that story. It is telling in so many ways. The young man's anxiety was quelled with kindness and a little help.

Oh, Robyn. To whittle down to just those few words that say so much is hard. I appreciate the struggle as well as the amazing result. Your encounter makes me shudder. As a white woman, I've had to calm myself and my brain wiring many times to realize that black men are people, too. Not savages. I was walking in our park daily and worked hard to face a large black man, also out for a walk, and smile. I eventually learned who he was, a kind community organizer. It's important to do the work to change the self-talk.

--Thanks, Janice - it was a blessing for me to meet those young men. I was trying to process and check several different thoughts, intentions, and emotions when I initially heard the ruckus, not knowing that our encounter would end up in frank conversation and a hug. ……...……………………...……………………………………………………………………………………......………………...……………………. --Hi, Margaret - Thanks for hosting us all today and for your kind words re. the haiku. Part of what I was thinking through initially that morning was that the behavior that young man was exhibiting would have made me on edge no matter what color he was. That's just a fact. But there is that layer of below-the-surface societal racial bias that must be challenged, too, even in ourselves (especially in ourselves?). I am hopeful that with the variety of faces in crowds of peaceful protesters in every state, good can emerge from these awful tragedies.

I wish I still had it to show others, but I remember some of the passages in my own history book, Robyn. No truth included, "legend" is correct. Thank you for sharing your story. We do need to think first, then think again before acting, don't we? Best wishes for that 'virtual' First Friday!

--Thanks, Linda! It's amazing what passed as instructional writing, and not that long ago. I remember showing my kids those passages (they were already adults), to give them a window into the historical and cultural sense of these wrongs.

I was already on the verge of tears from another post and now yours has put me over the edge. Thank you for sharing this personal story, Robyn, as well as the details surrounding your haiku. I hope to tune in for your virtual First Friday later today! xo

--Oh, Michelle - lots of tears in these days. But we need those, too - sending you a big, virtual hug. Thanks for coming by with your beautiful, big heart.

Robyn, your shop looks just the way I picture one of the shops on your street, hence the name artsy (perhaps). I have collected many antiques along the way including my living room couch that was in one family for 100 years until I bought it. It is a Victorian rosewood couch-just the type for a store of quality so I have been looking for a dealer to love it as much as I have. I thought your promo video was engaging and charming so best of luck. I appreciate your haiku and your sensitivity for finding the right wording. Also, your encounter shares an important lesson-not to judge others by outside appearances. We never know what is in store for us, right? Best of luck tonight. Are the browsers all expected to wear masks?

What a wonderful post. Your haiku is simple and meaningful in delivery. And, your story of the car trouble touching. Thank you for sharing these pearls today.

Thank you for sharing your story. I really liked how you used the word potential. I think this is part of what many (both black and white) are afraid of - the potential for misunderstanding, the potential for anger, hurt, or even violence. You stopped, you asked, you listened, and you responded. Thank you for showing us all how we can work to get along, despite our differences.

- Carol @ The Apples in My Orchard

Thanks for sharing your story, meaningful in many ways. That was indeed heartbreaking to hear that young man's comment about asking for help. Fear on both sides. I'm glad it ended with a hug and new understanding.

Your haiku, with the double meaning of legend, is wonderful, Robyn. I appreciate your sharing the story of your encounter with those two men. Your taking that step forward past your initial concerns seems to have made all the difference. It's a compelling story.

Thanks, Molly - wishing you and yours a weekend with some rest and peace and good health!

Robyn, I love how much you've said in so few words! Really makes you stop and think. Thank you. And we love maps! I'm heading over to artsyletters to see what you've been up to.

Hi there, Laura - Thanks so much on all accounts! You are always a champion of hard-working poems of few words. [And many thanks for checking out my new items and for your order.] :0)

Your haiku is perfect. I think you should get it published on Rattle in their "Poets Respond." https://www.rattle.com/respond/ Your process notes will help me write ANY kind of poetry this week. I've been stuck in the "too much of me, too much preaching" rut. Now I see how I might get out. Thank you.

Humbling feedback, Mary Lee - thank you SO much. That Rattle feature is great - much appreciation for the link! Glad you found a helpful nugget over here this week, and warmest wishes for good health and poetic inspirations.

O Dear Robyn & Seth - If only you two were multiplied by a billion of prayer-thinking, calm-reasoned heart-full human beings. I have learned much from this post, which begins with something smilier to me (map problem, er-- collection) a challenging poem from a moment of terror & ends with my smile underneath wet eyes. I am so heart-heavy but grateful that the young man shared that comment, after the hug. I am learning, learning, learning. Especially with the agape love you showed these gentlemen. xox

This is a beautiful story. It gave me chills.

Thanks so much, Peggy. Big virtual hugs to you.

(And, Jan - how did I miss your beautiful comment from June? Oh, my summer was just a wash! Thanks to you, too!)

XOs to you both!