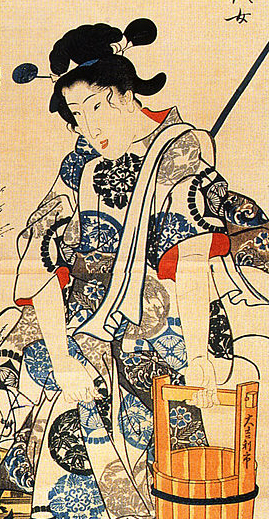 Detail from a circa 1840 woodcut of "Chiyo of Kaga Province" by Utagawa Kuniyoshi.

Greetings, Poetry Lovers!  Here we are at April's doorstep.  For Poetry Fridays in April, I'll be sharing some of David G. Lanoue's recently translated "dewdrop haiku" by Issa - that was David's quarantine project! Learn more about David at haikuguy.com .

For today, after another week with a tragic mass shooting, on the heels of Georgia's with its racial undertones, I thought I'd simply share a poem by a famous early female haiku poet.  Today, March 26, is a day across the country to focus on #StopAsianHate.

Fukada Chiyo-Ni lived from 1703-1775 and was influenced by Basho and his followers.  She was a poet, artist, calligrapher, and nun during her lifetime.

Patricia Donegan and Yoshie Ishibashi wrote a book about her, Chiyo-ni: Woman Haiku Master (Tuttle, 1998), but it is sadly out of print. An article on The Haiku Foundation website features Donegan's discussion of women haiku poets who have influenced her, including Chiyo-Ni, which you can read here .  A few excerpts from the book and more can be found here.

The poem of Chiyo-Ni's that always gets me is this one, which is said to have been written after the death of her young son, her only child.

The little dragon-fly hunter, –
How far I wonder,
Has he gone today.

There are many translations of this haiku, but this is the version offered by R. H. Blyth in Volume I of his A History of Haiku (The Hokuseido Press, 1963).

Here's a link to the website of the Chiyo-Jo Haiku Museum in Japan, with more information and her haiku.

Finally, here's a recently published haiku of mine about grief, too, though it was written about someone's passing at the end of life, rather than the beginning.

in the old song

Join the rest of the Poetry Friday Roundup at Soul Blossom Living, where Susan is rounding up Poetry Month plans as well. Wishing you peace and good health as we continue to the march into Spring.

Our news channel is sharing stories about those lost this week, heartbreaking to hear but I want to remember who they are! Thanks for the links, Robyn. I'm going to try to write haiku (haigas) this April, studying what sources I have, including you! I hope your weekend is a lovely one.

Thanks for introducing us to Chiyo-Ni. Her haiku is heartbreaking. Sorry about the loss of your friend. Looking forward to your NPM project. :)

Your posts always inspire me to learn more about haiku and these women poets in particular. Such austere lives and the sadness in Chiyo-Ni's poem and in yours as well seem appropriate to the moment.

--Hi, Linda - Been keeping all of my Denver area folks close in thoughts and prayers this week. Thanks for coming by - I'm looking forward to your haiga project!

--Thank you, Jama - that haiku of mine was actually one written with Jeff's mom in mind, when we heard some music that reminded us of her. And Chiyo-ni's works are treasures!

--Thank you for the kind words, Janice - haiku seems to be able to hold all emotions.

Robyn, your haiku hits home. I was at a funeral (socially distanced and outside yesterday) and the feeling of loss in the celebration of life was real. Many tears, lots of laughs. I'm so glad we could hold this funeral. They are so important and so many have lost out on that in this pandemic.

Poignant haikus, Robyn. I am touched by your grief notes. Thank you for sharing.

Thank you for introducing me to this new haiku poet. Both her and you haiku are perfect bookends for grief. We've had too much of that this past week and year.

Haiku strikes at the essence and the heart. Glad to learn more about Haiku. It is a deceptive form and when done so well, it is perfection. Thank you, Robyn.

--Dear Linda, I'm sorry to learn of such sadness in your week. You are right; the rituals are so important, and we've lost much by not being able to meet in person for the last year. (We couldn't have a proper funeral when my husband's father died last summer, though we did gather as a family for an outside and socially distanced service, which was appreciated by all.) Take good care.

--Hi, Karen - Many thanks for coming by, and for your kind words.

--Well put, Kay - it's been too much. I hope enough people can stay sane for just a little while longer so we can truly turn the corner this year. Thanks for visiting.

--Thanks, Janet, for those lovely comments. Haiku does strike "at the essence and the heart," as you so beautifully said.