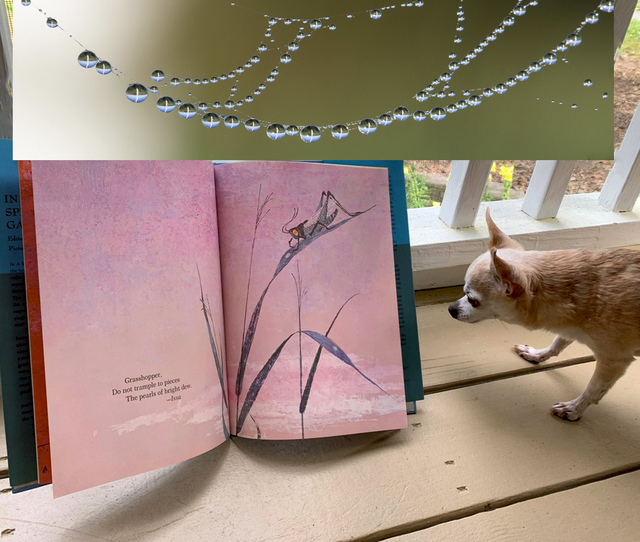 Rita reading Issa in IN A SPRNG GARDEN - photo by Robyn Hood Black.  Image of dewdrops on cobwebs (at top) by Heiko Stein on Pixabay.

Greetings, Poetry Lovers!  Thanks for the enthusiasm about my National Poetry Month project for Poetry Fridays over here, a little time spent with recent Issa haiku translations by Dr. David G. Lanoue - specifically, Issa's dewdrop haiku.  (Just scroll back to last week's post if you didn't catch all that.)

First, a little diversion.  In the comments last week, Janet Clare Fagel mentioned a book she has loved and used over the years when sharing haiku with students, IN A SPRING GARDEN, edited by Richard Lewis and illustrated by Ezra Jack Keats (The Dial Press, 1965).  How did I not have this book in my collection of old (& some new) haiku books for young readers?! I am so grateful she mentioned it.  I was able to find a very nice copy on Ebay.

The book presents haiku by old masters corresponding to the unfolding of a spring day, beginning to end.  Many poems, such as the Issa dewdrop haiku pictured above with my dewdrop of a doggie, Rita, were reprinted from R. H. Blyth's Haiku volumes (Hokuseido Press, Tokyo).  Of course, the art is fantastic.  Thanks again, Janet.

The poem above ends with "pearls of bright dew."  If you go to David G. Lanoue's Issa Haiku Archive page (remember, there are upwards of 10,000 poems he's translated, plus hundreds of new ones added during quarantine!) and type "pearls of dew" in the search box, you'll find several examples there, including this one, followed by David's commentary:

pearls of dew--
whichever way you tumble
is happy

Based on Issa's many other haiku about dewdrops, their happiness is due to Amida Buddha's vow to save sentient beings from this temporary world of sorrow. They fall to nothingness, but Buddha will, in a sense, catch them. Of course, the dewdrops are sentient only in Issa's imagination; they more accurately represent Issa and his human readers, present company included.

One reason Issa is so beloved is that his body of work demonstrates his ability to see life sympathetically from many perspectives - other people, animals (especially the most humble or cast aside of humans and beasts), plants - and, even,  dewdrops!  As David writes in A Taste of Issa, Issa is known, among other things, for his "warm, loving connection with living things, especially animals but also including humans and plants.  As a Buddhist artist brimming with compassion and respect for his fellow beings, however small, Issa likes to address his nonhuman colleagues directly...." (David adds that critics have called Issa 'a poet of "personification" or "anthropomorphism," ' but rather than projecting human attributes onto a nonhuman subject, Issa recognizes even a small creature such as a snail as a "fellow traveler on the road of existence.")

In November, for a Zoom gathering for a Hot Springs, Arkansas, haiku conference, David delivered a presentation called "Dewdrop Worlds - Recent Discoveries from Issa."  (I was able to listen in on my phone from my studio that day, but, alas, couldn't see the visuals.  David kindly shared them with me and I'll share a couple of those this month, too.)

"Dew is a traditional Buddhist image for how brief and fleeting life is," David explains.  Issa was a Buddhist of the JōdoShinshū faith, a school of Pure Land Buddhism.  We'll explore this theme of transience a little more as the month goes on.

For now, here are a couple more of David's pearly dewdrop translations:

Issa plays with the different meanings of tama: ball, sphere, jewel, and gem. He imagines that the god of luck is bestowing him with riches.

Thanks as always for joining in, and be sure to check out all the sparkling offerings over at The Opposite of Indifference, where the incandescent Tabatha is rounding up Poetry Friday.  Thanks, Tabatha, and continued thanks to David for the generous sharing of these Issa haiku!

Don't you just love David G. Lanoue's work? I had the book that Janet mentioned. Loved it and used it a lot.
Adding 'dewdrop' to my words to write a haiku with.

Hi, Jone - I don’t know how I missed the SPRING book but so glad to have it now. And I can’t imagine the contemporary haiku world without David’s body of work, which I’m grateful is still growing & going strong! :0)

What a beautiful book - I am going to hunt a copy down. And, as always I have learnt so much from your post, and am inspired to think more about both dewdrops and haiku. Thank you Robyn.

Rita has great taste in books. :) David's work is so important. I'm grateful for the ways you highlight it, Robyn. xo

--Happy Poetry Month, Sally! So glad you enjoyed. Wishing you all the best on the other side of our "dewdrop world."

--Agreed, Irene, re. David's work! Thanks so much for coming by for a dewdrop break. (& I'll pass along the compliment to Rita - she loves compiments.) ;0)

Oh, I love Issa! Thanks for the dewdrops fix today (so beautiful) -- and I didn't know about the book Janet mentioned, so thanks for that too!

--Hi, Jama - thanks for popping by again with your Issa-love! The world is better for him and for you. :0) The picture book is a treasure.

Oh, how lovely to visit your blog, Robyn, and read these beautiful pearls of haiku wisdom via Dr. David! Thank you for helping me tumble a bit happier today. :) xo

--Hello there, Michelle! Happy to offer a happy tumble, particularly since last week's post was more grief/loss-oriented. Wishing you a haiku-inspired weekend! Thanks for coming by.

I appreciate all the learning here, Robyn, the links to David's work, too. I know I'll always be learning to write these, but it's a lovely journey to do so & to read Issa's work!

Thank you for this! How wonderful!

This is a lovely post, Robin, and it's astounding to me that he wrote so long ago and that his ideas are just so important and current now

I had not come across In a Spring Garden in my haiku readings and I thought I'd seen every haiku picture book. Illustrated by Ezra Jack Keats! Thanks for the recommendation.

So happy you found In a Spring Garden. You will love it, too, Diane. So beautiful. I love reading the Issa haiku. Thank you, Robyn and glad you love the book! I have loved haiku for such a long long time.

Rita looks like she's tumbled into happiness... thanks for all the dewdrop pearls!

--Hi, Dear Linda - I will be a lifelong student of haiku as well! Thanks for your companionship on the journey. :0)

--Tabatha, thanks so much for coming by, and for hosting us all this week. (Glad you enjoyed the post!)

--Hi, Ruth - Thanks for swinging by! Happy Poetry Month to you.

--Timeless, Janice, aren't they? And David's translations make them accessible. Thanks for visiting!

--So appreciative, Janet, of your sharing that title. Like Diane, I thought I "knew" the classic books out there - this has been such a treat to discover!! It's almost as old as I am. ;0)

--Haha, Buffy - Rita does enjoy a good poem and some fine art. ;0) Thanks for popping in!

I always learn something new from you, Robyn. Thank you for that! I've got to track down a copy of the Spring book. I love a challenge! Thank you!

Hi, Christie - very kind to say, and that makes my heart glad! Thanks for visiting. Here's to all kinds of poetic challenges this month! :0)

Robyn, your love for haiku is absolutely contagious. I love what I learn in your posts. Thanks for the book title and the references to where we can find more. So few words of a haiku can and have done so much for readers...it's a little miracle form.

--Hi, Linda - "a little miracle form": LOVE that. Thanks so much for sharing your goodness over here this week with these lovely thoughts.

Robyn, I have now read your post twice today and find new gems each time. The dewdrop poem is lovely. Thank you for the enlightenment on haiku today.

This is why I love haiku...so simple, so beautiful, so thought-provoking. Thanks for sharing, Robyn!

--Hi, Carol - Thank you for reading so thoughtfully! Good poetry - even the smallest of poems! - can offer new insights each time we read it, right?

--Hey there, Matt - glad you enjoyed. And glad you're a haiku fan! Thanks for coming by this week.