Poetry Friday - Bragging on the Teacher Daughter, and a Kahlil Gibran Poem... 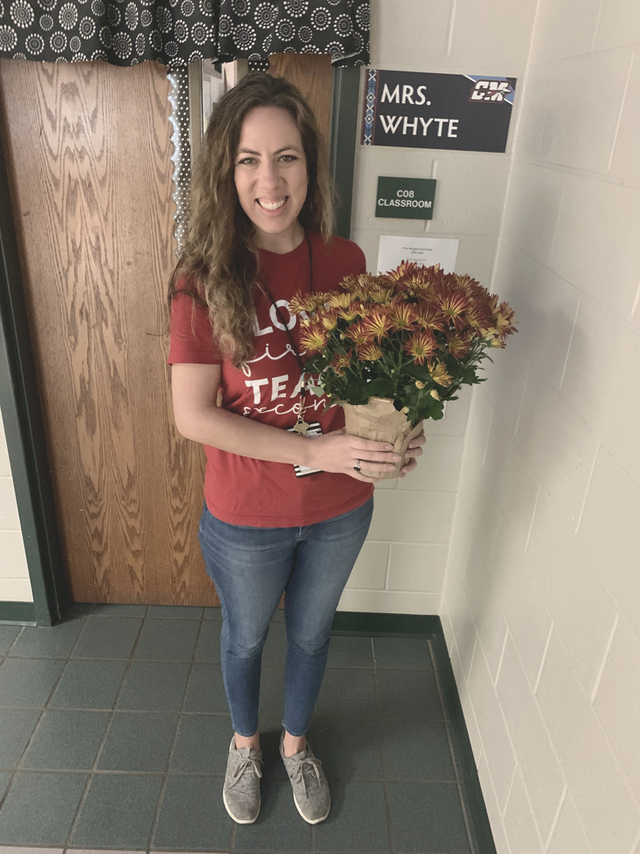 When our 29-year-old daughter, Morgan, was three years old, her "Mother's Morning Out" teacher at our church pulled me aside.  "You know, don't you," she whispered in her soft and kindly voice, "Morgan is the leader of the class."  Well, I wasn't terribly surprised to receive such news, as Morgan had been giving me driving directions from her car seat for a while at that point.

That take-charge attitude served her well growing up, and continues to flourish in her chosen profession as an elementary school teacher for several years now.  She shepherds her third graders with confidence, compassion, and the not infrequent dance party. (Let's just say a new generation of youngsters knows lyrics to Backstreet Boys songs by heart.)

Last week, Morgan learned she had been chosen as her school's Teacher of the Year! It was a banner week in her classroom, as her exuberant charges had also won the Spirit award at the weekly assembly, and got to keep the trophy until this week.  Of course we are proud as punch of her, and not really surprised, knowing how many times she's been found underneath a desk with a troubled child who has shut down emotionally, or cheering on her kiddos like a crazy person at a Field Day tug-of-war match. And did I mention that *poetry* is a regular feature in her classroom? :0)

So CONGRATS to our Morgan, and here's a bit of a philosophical take on teaching by Kahlil Gibran (1883-1931):

Then said a teacher, Speak to us of Teaching.
And he said:
No man can reveal to you aught but that which already lies half asleep in the dawning of your knowledge.
The teacher who walks in the shadow of the temple, among his followers, gives not of his wisdom but rather of his faith and his lovingness.
If he is indeed wise he does not bid you enter the house of his wisdom, but rather leads you to the threshold of your own mind.
The astronomer may speak to you of his understanding of space, but he cannot give you his understanding.
The musician may sing to you of the rhythm which is in all space, but he cannot give you the ear which arrests the rhythm nor the voice that echoes it.
And he who is versed in the science of numbers can tell of the regions of weight and measure, but he cannot conduct you thither.
For the vision of one man lends not its wings to another man.
And even as each one of you stands alone in God's knowledge, so must each one of you be alone in his knowledge of God and in his understanding of the earth.


This poem appears in The Prophet  (Knopf, 1923) and is in the public domain.

Many thanks to ALL you educators reading this right now - your gifts and commitment are appreciated! One of these superstars is hosting our Roundup this week:  Catherine at Reading to the Core. Thanks, Catherine!

You must be exquisitely proud of your daughter. What a wonderful teaching award. The poem you shared about teachering anyone is so true. You have to lead people to knowledge when they are ready. I think of that in my communications with my grown sons.

Congratulations Morgan - and congrats mom, too. And this poem is a perfect celebration of teachers everywhere, who have had to really dig deep these past two years.

Congratulations on this exciting news!

Congratulations to Morgan!! what a shot in the arm this most be, especially after these most difficult teaching years. Yay for poetry, and for the proud parents, too. xo p.s. thanks for the Gibran, which always always nourishes me.

Congrats to Morgan and her class! Love that story from when she was little. Thanks for the Gibran poem, too (new to me).

Congratulations to your daughter. She has received an outstanding award at such a young age. I am so pleased that she not only teaches the child with an inspired stance but that she is loving and compassionate. While Kahlil Gibran is one of my favorite inspirational poets from the beginning of my career in education, I have never read the poem you chose. Fav line: "He (teacher) does not bid you enter the house of his wisdom, but rather leads you to the threshold of your own mind." I need to share this with other educators,

You must be so proud and your daughter is so accomplished! Gibran really understood what teaching is about. Thanks for sharing that amazing poem.

That is hilarious - imagining a child giving driving directions from her car seat! But, these are the stuff from which powerhouse human beings are made. Well done to her!

Huzzah for Morgan! The profession needs more like her! This bit from Gibran rings true: "...he does not bid you enter the house of his wisdom, but rather leads you to the threshold of your own mind."

I can hear the pride in your voice. Congratulations to Morgan. Sounds like she has chosen the right place to be. I love the wisdom of the Gibran poem. Being a teacher is a calling.

Congratulations to Morgan and her proud parents! How lucky her students are to such a loving, compassionate teacher! This passage from The Prophet is so wise. In addition to the line quoted by others, I love this: The teacher ... "gives not of his wisdom but rather of his faith and his lovingness." Thank you for sharing it with us.

Let's make that "gives not of HER wisdom but rather of HER faith and HER lovingness"!! Congrats again to Morgan and to her punchy-proud parents. It sounds like things are going better for her pandemic-wise than for many--is she by chance in a private school? I love thinking of 2021 3rd-graders dancing to Back Street Boys.

What a nice honor for your daughter! Love it that the third graders know the Backstreet Boys.

--Good Saturday Morning, All - sorry for not responding to comments yesterday; it was an artsy-intensive day and evening! But I'm grateful for your coming by:

--Thanks so much, Janice. You are right - that "leading" applies across the board to all ages, even when someone is trying to teach THIS old dog a new trick!

--Hey, Sally - definitely deep digging, from our side of the world to yours. Thanks for joining in!

--Appreciations, Ruth - and continuing to keep you and yours in hearts and prayers as you teach and lead in Haiti.

--Thank you, Irene - a lovely boost for sure. It's been a challenging couple of years for everyone! (And agreed about the nourishing power of Kahlil Gibran's words.)

--Thank YOU for paying a visit, Jama! Glad to share this wisdom, words I'm sure I'll revisit again and again.

--Such lovely words, Carol - thank you. And I love that passage you highlight - what an important perspective.

--Thanks again, Janice - it's an inspiring poem for sure.

--Thanks, Tanita - She was a bit of a handful as a toddler/preschooler - ha! We're very proud all that initiative is being put toward such important grown-up work in the world. ;0)

--Hi, Mary Lee - You are one of the many educators in this tribe whose life work has embodied these ideals! Hope you are having a glorious fall with a bit more creative freedom than the teaching schedule allowed. :0)

--A calling indeed, Margaret - Thanks for your kind words. YOUR students are supremely lucky to have you, too!

--That line struck me too, Catherine - how teaching involves the giving of the whole person. Thank YOU for all the "faith and lovingness" you impart to students as well, and thanks for hosting us all this week!

--Amen, Heidi - I flipped that in my mind while reading - ;0) . And, actually, Morgan teaches in a large public school - a variety of kids/backgrounds/situations! Such a strong and caring staff they have, with steady and inspired leadership. It's so important for teachers to feel supported. I hope you do, as you impart your Heidi-magic and your own compassionate wisdom in your classroom!

--Hi, Susan - Thanks for coming by! And, not sure it's technically in the state standards and curriculum, but... the kids love the break! (And their parents find it quite amusing....)

Many well deserved congratulations to Morgan! And thank you for sharing Gibran's poem, Robyn. :)

Hooray! The beginning of this school year has not been easy for me and I am just delighted to see this news and celebratory poem. Those leader children are such gems...not necessarily easy to parent...but wonderful people in our lives. Thank goodness for Morgan and all she brings to the "job" of teaching. This lifts my spirits immensely.

--Thanks so much, Bridget! Always happy to share some Kahlil Gibran wisdom... :0)

--Hi, Linda - sorry about rocky passages for you lately. I hope the path will smooth out a bit. Thanks for such kind words about Morgan. You are SO right about the parenting of leader-children - one thing that helped me all those years ago was Mary Sheedy Kurcinka's book, RAISING YOUR SPIRITED CHILD. I see it's still in print! ;0)

How proud you must be, teacher-mum. It is so lovely when you see your kids working within their gifts and blossoming.

Many congrats to your daughter and teacher Morgan!!! And thanks for the philosophical thoughts of Kahlil Gibran, that holds many kernels within it!