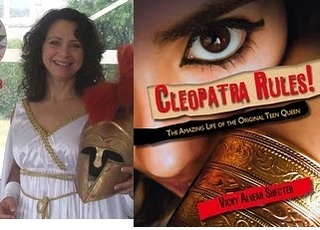 Vicky Alvear Shecter
If you think ancient history is as stuffy as the inside of a tomb, think again. SCBWI Southern Breezer and talented author Vicky Alvear Shecter (ALEXANDER THE GREAT ROCKS THE WORLD) brings her “history with a twist” approach to one of the most fascinating characters the world has ever known, Cleopatra VII. In CLEOPATRA RULES! The Amazing Life of the Original Teen Queen (Boyds Mills, 2010), Vicky shows readers young and old why you shouldn’t believe everything you’ve seen or heard about Egypt’s last pharaoh.

Welcome, Vicky! In this beautifully designed and kid-friendly book, you dig way past the stereotype of Cleopatra as a femme fatale and reveal her fiercely loyal, politically-savvy side. When did you first become Cleopatra-crazy, and how long have you wanted to write a book about her?

I haven’t always been Cleopatra crazy, but I’ve definitely always been an ancient history buff! This book was originally sold as a book on many ancient queens but when I had to resell it after the first publisher closed its doors, the editorial director wanted to focus only on Cleopatra. I think it was a good call on his part (Larry Rosler at Boyds Mills Press).

It’s hard to imagine the mounds of research this book required! But I happen to know you love that. [And let me tell you, Vicky does an amazing job as a volunteer docent at Emory University’s Michael C. Carlos Museum in Atlanta - http://www.carlos.emory.edu/ .] What were some of the most fun aspects of your research, and the most challenging?

The most fun aspects involve learning something new. For example, when I learned that Cleopatra had four children, I almost fell out of my chair! I had always fallen for the Hollywood perception of her as a femme fatale rather than what she was--a savvy politician and devoted mother.

As far as challenging, I would say that dealing with limited primary sources was a challenge. The only sources we have for Cleopatra’s story are Roman and they were biased against her for obvious reasons. How I wish we could have sources from her own hand or court!

How did you decide which facts to include and which to leave out? Was that difficult?

This is a good question because often it’s too easy to get carried away with too many of the little details that could bog a story down. I handled the problem by including detailed endnotes.

So, for example, when I make the claim that modern scholars believe that Cleopatra was not at all a “harlot” but quite loyal to her Roman consorts, I’d better have backup. So it’s in the endnotes where I can cite primary sources and quote from respected scholars.

For example, somebody who disagrees may say, “But what about King Herod? Doesn’t Josephus say she threw herself at him?” Well, in the endnotes, I explain: yes he does, but nobody believes him! He’s not a reliable source. The facts are that Cleopatra and Herod hated each other. Antony gave her some of Herod’s territories to manage and Herod was spittin’ mad about it. She wanted more (one of her goals was to resurrect the glory days of her family’s empire). Why in the world would she risk her marriage to Antony to sleep with a man she hated when it was Antony making these decisions? So I quoted two renowned scholars who claim that Josephus’s accusations against the queen are unreliable and self-serving.

What drives you to share ancient history with the next, and future, generations?

Besides the fact that I love studying it, I think it’s a real shame that kids are growing up without understanding our ancient legacies (good and bad). For example, in my Alexander book, I talk about the difficulties he faced in holding Afghanistan, which mirrors our experience in war today. Similarly, it’s helpful to see how Augustus’s propaganda against Cleopatra still colors our opinion of her and of all women in power. These are issues that still affect us.

Stuck in his villa with Caesar’s enemies whooping it up on the streets, Cleopatra probably felt like a bull’s-eye target in a room full of twitchy archers. (p. 45)

The approach has elicited different opinions, but I have to think kids would just love it. What do you hear from young readers and teachers about the way your books are written?

Some “old guard” reviewers have been a little uncomfortable with the tone mostly, I think, because people have tended to treat ancient history as something somewhat sacred (and stuffy!). By mixing it up a little, I’m hoping to make it fun and relevant. The overwhelming response from teachers and students is that it really works for them.


Tell us a little bit about all the great visual content in the book – how did you go about tracking down images and permissions?

One of the shocks for me in writing nonfiction was that I was expected to find and pay for all photos used in the book! In the old days, there used to be photo researchers. Not anymore. I can’t even count the hours I spent looking for images that we could both use and afford. The permissions weren’t too complicated—if they were private photos, I asked permission of the individual photographers. If they were owned by a museum, I usually had to sign a contract and—as in the case with the British Museum—pay a pretty penny too. BTW, I didn’t have to actually outlay the cash—the costs are deducted from royalties. Once they costs are recouped, I can (hopefully) earn royalties.

And – about that gorgeous cover! You’ve blogged about the unique way it came about, with Boyds Mills Editorial Director Larry Rosler’s happening upon the self-portrait by Elizabeth Salib: http://historywithatwist.blogspot.com/2010/08/face-behind-cover-of-cleopatra-rules.html

It certainly seems perfect for the book. How did you react when you first saw it?

I knew that was the one! However, some of the people at the publishing house had to be convinced, and I’m glad Larry Rosler finally won them over.


Finally, I’m so excited about your YA book scheduled to appear from Scholastic/Arthur Levine next summer, CLEOPATRA’S MOON, about Cleopatra’s daughter. Can you give us a quick sneak preview?

The novel came out of the research I’d done for CLEO RULES. I became fascinated by the fact that Cleopatra’s daughter, Selene (the Moon), was the only one of her four children to survive into adulthood. What must it have been like to have had such a strong and powerful mother? How did she deal with the trauma of having both her parents commit suicide? What was it like to be forced to live in Rome in the home of her mother’s conqueror?

Her story just wouldn’t let me go. So thanks to some writer friends who encouraged me to “go for it,” I decided to try my hand at historical fiction. And I am, as you can imagine, honored and thrilled to have been working with Cheryl Klein on the project.

Thank you for the tour through Cleopatra’s world, Vicky!
Learn more about Vicky, and explore ancient history, visit her blog by clicking here for http://historywithatwist.blogspot.com.