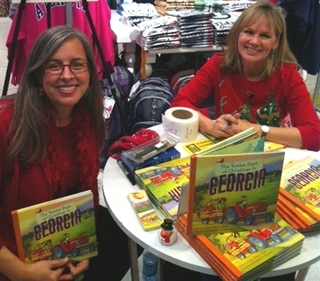 If you are in this neck of the woods, be sure to stop by their next signings: Tuesday, Dec. 7, 4 – 5 p.m. at the HALL BOOK EXCHANGE in Gainesville, and Thursday, Dec. 9, at 7 p.m. at LITTLE SHOP OF STORIES in Decatur. Elizabeth and Susan agreed to drop by here, too, and tell us about their book.

Welcome, Susan and Elizabeth! The Twelve Days of Christmas in Georgia takes readers on a colorful journey led by cousins Ava and Jacob, from the mountains in the north to the Okefenokee Swamp in the south to the Atlantic coastline. Jacob describes their adventures in letters home, tucking in lots of history and fun facts.

How in the world did you decide which points of interest to feature?

SUSAN: It was tricky, to tell you the truth. My initial list was 27 or 28 items long! I considered “staying power” first; I didn’t want to include a place that might be gone in a couple of years. I tried not to be too commercial, too. In the end, it came down to choosing twelve places that said something interesting about Georgia and balanced history, culture and fun. And animals, of course. LOTS of animals!

Did you collaborate at all or work separately?

ELIZABETH: I was under a tight deadline when Susan was in the thick of writing 12 Days, so must admit I was no help at all - pooey!

SUSAN: Yeah, what SHE said!

Did working on a book in an established series present any special challenges or opportunities?

SUSAN: Yes, in a way it did. I eliminated a couple of places due to their similarities to places featured in other books. For instance, I wanted to include the “Ghost Tours” one can take in Savannah—Savannah is very proud of its ghostliness—but the Louisiana Twelve Days book featured something of the same sort, so I chose not to use that.

ELIZABETH: I didn't want my artwork to be extremely different from the art styles of the other books, so I adapted my style a bit to make sure it would look good on its own AND with the other titles.

Elizabeth, tell us a little bit about patterning the illustrations after the traditional “12 Days” Christmas song.

Well, getting 12 kangaroos onto one page was challenging. As was the page that showed ALL the gifts - woosie that was a tough spread to pull off! I've seldom had to tackle including so many different things in one piece of art!

You’ve both lived most of your lives in Georgia. What’s something new you learned while working on this project?

SUSAN: I was both surprised and delighted to find that Dawsonville, Georgia is home to the largest “mob” of kangaroos outside the continent of Australia. Who knew? I took my granddaughter and a friend and it passed the “cool” test, so I had to use it!

ELIZABETH: I learned what a cool state we live in! There were so many treasures I learned about while doing research for the artwork, it's made me hungry to learn more about our great state of Georgia!

Also, you’ve been travelling around like Ava and Jacob to signings and celebrations for the book’s release! What has it been like to launch the book together?

ELIZABETH: It's been a lot of fun and challenging as we adapt to the different crowds and venues as needed. The response to the book has been wonderful, especially as a teacher gift, so mostly it's brought on a lot of smiles.

SUSAN: It’s double the fun of doing this type of appearance by oneself! Elizabeth and I are fortunate in that we’re good friends as well as collaborators. I hope this becomes an annual thing for us!

You’re also both very involved in SCBWI Southern Breeze, Susan as PAL coordinator and Elizabeth as Illustrator Coordinator (plus lots of other volunteering for both of you!). What advice do you have for folks interested in writing or illustrating for children?

ELIZABETH: SCBWI.org is the first place to look, but I also have an article on my website called "How Do I Get Published?" which has proven to be a good starting point for many.

SUSAN: I agree. SCBWI is a wonderful launching pad for those who want to write and publish for children. Children’s writers tend to be very much about helping one another, and not so much about knocking the other guy down to get ahead. They’re generous. And e’s article gives some very good advice, too!

Finally, how about sharing one fun thing that not many people know about you . . . ??

ELIZABETH: That's my dog, Bernie, driving the tractor on the cover. He's in all my books, but he's moving up in the world! (He's actually quite shy - all this stardom is a bit much for him.)

SUSAN: While writing my novel VEGAN RULES (which features a scuba diver as the protagonist), I learned about “memorial reefs.” Made up of numerous hollow concrete balls, the reef is a sort of underwater cemetery. I’m going to do this when I die—undergo cremation, then have my ashes mixed with cement and molded into an open, holey sort of ball. Then they’ll place it with others to form an artificial reef. My remains will provide corals, sponges and other sea life the bumpy surface they need for survival. Too much information? LOL… Hey, if you’ve got to die, you may as well go out helping somebody, right?

Absolutely! That's certainly not something I would have guessed - there’s never a dull moment with either one of you. Thank you both so much for visiting! It’s been a peachy treat.

ELIZABETH: Thank you Robyn! You're a peach!

SUSAN: Yes, Robyn. Thanks so much!

Learn more about Susan and Elizabeth and several upcoming appearances at SUSANSPAIN.COM and DULEMBA.COM
Also, the activity page for The Twelve Days of Christmas in Georgia can be found HERE:

What fun it must be to be able to promote your book together! The whole coral reef as a final resting place was new to me -- Who knew! I love learning new tidbits.