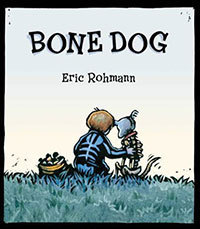 In Honesdale, in addition to enjoying the incredibly fun relief printing workshop he offered, I chatted with him for a few moments about his new book, Bone Dog (Roaring Brook Press, 2011). The Highlights folks were gracious to provide a copy of the book for attendees, but I'd already brought one in my suitcase.

I don't have an official interview to offer, but I do have to keep shouting out about how much I LOVE this book. Eric joked during that weekend about how it was standard procedure, when writing a picture book, to kill off a main character by the second or third spread. That's actually what he did in this touching (but not sentimental), humorous, heartfelt story about a boy and his dog.

Gus's beloved old dog, Ella, dies. He goes through the motions of daily activities but is grieving this loss.

"And when Halloween came around, Gus didn't feel like trick-or-treating. But he pulled on his costume and trudged out the door."

He's dressed as a skeleton, he is, and let's just say that as he makes his way home later, some real skeletons appear and they are up to no good. The text and illustrations cause just enough tension that a young reader will be wide-eyed and worried, but not terrified.

The skeleton characters are goofy and wicked and full of themselves, and the reader can sense that they might just be too big for their nonexistent britches.

I won't spoil the story by revealing how things are resolved, but Ella appears in a new form and helps to set things right, with a brilliant idea from Gus. (The book is called Bone Dog, after all - not really a spoiler there, is it?)

Some hilarious spreads ensue, followed by a satisfying ending. Not a "happily ever after," mind you, or something tidy and sweet - but something very rich and honest. Death is a heavy subject, and this book looks it straight in the eye - but with such fun, expressive illustrations and a wacky sense of humor that readers young and old will enjoy the tale.

To learn more about the book, click here for Eric's interview with Vicky Smith posted a few days ago on the Kirkus Reviews blog.

And to learn more about Eric, check out his brand new website.

With all the starred reviews for this one-of-a-kind book, my two cents' might not amount to much - but it's Halloween and I couldn't resist sharing my favorite recent picture book treat. Go dig it up!
Be the first to comment