Happy Birthday to A CHRISTMAS CAROL 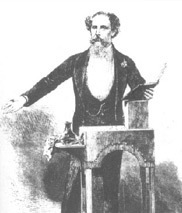 I know, technically A CHRISTMAS CAROL is not a poem, but a novella, now perhaps best known as a play. But when I stumbled on the fact that it will celebrate its 170th birthday on Monday, I thought we could celebrate it anyway. [See note above. I had the wrong year - it's still 2012!]

Charles Dickens (1812-1870) wrote his story of Ebenezer Scrooge's change of heart in six (!) short weeks, and it debuted December 17, 1843. It was an immediate public and critical success.

In the preface, he wrote:

I have endeavoured in this Ghostly little book, to raise the Ghost of an Idea, which shall not put my readers out of humour with themselves, with each other, with the season, or with me. May it haunt their houses pleasantly, and no one wish to lay it.
Their faithful Friend and Servant, C.D.

If you haven't read the story or seen the play recently, here's our Mr. Scrooge at the beginning:

At length the hour of shutting up the counting-house arrived. With an ill-will Scrooge dismounted from his stool, and tacitly admitted the fact to the expectant clerk in the Tank, who instantly snuffed his candle out, and put on his hat.
'You'll want all day tomorrow, I suppose?' said Scrooge.
'If quite convenient, sir.'
'It's not convenient,' said Scrooge, 'and it's not fair. If I was to stop half-a-crown for it, you'd think yourself ill-used, I'll be bound?'
The clerk smiled faintly.
'And yet,' said Scrooge, 'you don't think me ill-used, when I pay a day's wages for no work.'
The clerk observed that it was only once a year.
'A poor excuse for picking a man's pocket every twenty-fifth of December!' said Scrooge, buttoning his great-coat to the chin. 'But I suppose you must have the whole day. Be here all the earlier next morning.'

Then, in a fitful night, our protagonist is visited by three spirits - the Ghosts of Christmas Past, Present, and Future. Let's just say the scenes they lay before Scrooge convince him to change his ways.

Here's a peek at a portion near the very end of the story:

Scrooge was better than his word. He did it all, and infinitely more; and to Tiny Tim, who did not die, he was a second father. He became as good a friend, as good a master, and as good a man, as the good old city knew, or any other good old city, town, or borough, in the good old world. Some people laughed to see the alteration in him, but he let them laugh, and little heeded them; for he was wise enough to know that nothing ever happened on this globe, for good, at which some people did not have their fill of laughter in the outset; and knowing that such as these would be blind anyway, he thought it quite as well that they should wrinkle up their eyes in grins, as have the malady in less attractive forms. His own heart laughed: and that was quite enough for him."

I love the description, "his own heart laughed."

We never tire of stories of redemption, do we? Perhaps this is why A CHRISTMAS CAROL thrives even today, so many years after it was penned by Dickens.

Wishing you a laughing heart this holiday season, I'll close with the last line of A CHRISTMAS CAROL:

...And so, as Tiny Tim observed, God bless Us, Every One!

For the entire text, visit the Electronic Text Center, University of Virginia Library .

You can also see a facsimile of Dickens's original manuscript at the online home of one of my favorite places on the planet, the Morgan Library and Museum (New York).

Now, for some great poetry this mid-December, go see what lovely holiday treats delightful Jama is cooking up at Alphabet Soup for the Poetry Friday Round-up.

Thanks for sharing, Robuyn - this is one of my all-time favourite stories, ever. A classic that has stood - and will continue to stand - the test of time!

Oooh, I do love that British spelling of "favourite"! Mine, too. Thanks for visiting!

Hi! Happy birthday to Mom, and to "A Christmas Carol" as well! Two of my favorite versions are the 1984 TV movie with George C. Scott and "A Diva's Christmas Carol" with Vanessa Williams as "Ebony Scrooge". There's also a great stage presentation here in St. Petersburg FL at freeFall Theatre. Love ya!

Hmmmm, I think we may have to have a reading of this over the holidays. Thanks for sharing!

Every few years they have different old movies of "A Christmas Carol" playing on tv, and I love to watch the different actors and scenes playing out with the same words. Not as big a fan of the new, updated versions that are out there. Love reading the book best! It has a poetic flavor.
I'll bet Dickens didn't even have an agent.

Mike, Thanks! Will have to check out the Diva version sometime... though I'd probably like the more traditional versions!

Happy Holidays, Liz! Thanks for coming by.

Donna, thanks for playing along with my stretch for Poetry Friday today - I love the language, too.

And thanks to all of you for not pointing out that I can't add (or subtract I guess), or perhaps worse, cannot name the accurate year that we're in right now. ;0)

Sigh -- what would Christmas be without Dickens? 170 years of this beloved classic is definitely worth celebrating! I love to relive the joy of Christmas dinner at the Cratchits' at the end of the story. :) Thanks for the excerpts!

Thank you, Jama, and thank you for hosting today! Hugs and cookies to you.

Thanks, e! (And you didn't make fun of me. ;0) Much appreciated, though I wouldn't blame you if you did.)

Got to love a bit of CD!

Ooh, I used to watch the 1951 movie every Christmas, and every Christmas Marley's ghost and the super-creepy ghost of Christmas future would give me the shivers (that silent pointing!). Thanks for sharing this and bringing back good memories, Robyn!

Renee, hi! So very creepy, I know. There was a recent version on this afternoon (kind of a computer/animated-ish one) - my hubby had it on while he was carving Christmas ornaments!