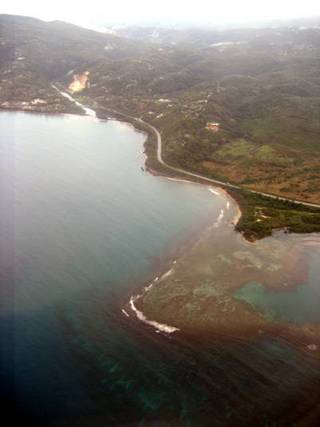 I've never been to Jamaica. But Jeff and Morgan went there on a mission trip back in 2008, and I sometimes think of their description of "Island Time," which Jeff has also encountered on trips to Central and South America. It goes something like this: Busses get there when they get there. "Don't worry." The pace can be different from our hectic, sometimes over-scheduled days in the states.

I feel like I've inadvertently slipped into "Island Time" this week - probably because of the hectic, over-scheduled bit. My "Art Break Wednesday" post this week on my artsyletters blog got put up late yesterday (Thursday). Here it is well into Poetry Friday, and I'm tapping away this morning.

At this stage of our lives, with this being the last summer to have both kids at home (Morgan will be launched into an apartment and masters in teaching program this time next year), I'm thinking a lot about time and change. We've been adapting to a big change for a little more than a year now, after my husband went through an unexpected and extremely trying job change in the spring of 2012. A haiku I wrote during that period appears in the current issue of Modern Haiku:

spring winds
a shift
of circumstance

I'll leave you with some thoughts from current U.S. Poet Laureate Natasha Trethewey (just appointed to a second term). This poem was written in 2007, about the Gulf Coast. (That, I'm much more familiar with!)

Theories of Time and Space

You can get there from here, though
there’s no going home.

Everywhere you go will be somewhere
you’ve never been. Try this:

head south on Mississippi 49, one-
by-one mile markers ticking off

another minute of your life. Follow this
to its natural conclusion—dead end

at the coast, the pier at Gulfport where
riggings of shrimp boats are loose stitches ...

From there, mosey on over the The Poem Farm, where the Amazing Amy has our Roundup this week. Take your time.

Robyn, how perfect is that haiku? Perfect. Wishing you "island time" for sure. xo

Hi, Irene! Thanks so much. And wishing you a little "Island Time" on your end in the midst of kids growing up, etc. :0)

Had to see what lovely poem would go with the picture and oh! It was SUCH a lovely poem. Reminded me of Tybee.

And your haiku touched me as well. Shifting circumstances at our house, too, with no kids around. Feels like I'm on Island Time every day. I kinda like it. :-)

Loved the haiku! Congratulations on the publish in Modern Haiku! Also, thanks for the link to the Trethewey poem. A very nice pairing with your haiku. True, this:

"You can get there from here, though
there’s no going home."

Cathy, thanks for clicking on over! I have fond memories of my kiddos as little bitties chasing seagulls on Tybee... Enjoy the bit of freedom in this season of your life! I'll probably adapt. ;0)

Hi, Steve! Thanks for the kind comments. And I was completely pulled in by those opening lines of Trethewey's poem, too.

This post made me smile -- I grew up on "island time!" And as you probably know, there's good and bad to that. :) I think summer was invented so that everyone can have a nice dose of island time -- to reflect, recharge, relax, rebuild and recreate. Lovely haiku, Robyn!

Jama, any time I make YOU smile, my day is complete. :0) Thanks for coming by - and I love your alliterative ingredients of ways to spend summer TIME - "reflect, recharge, relax, rebuild and recreate." I think that will be my mantra for July and August! Merci.

My heart is full of deep breaths. Thank you for both of these. I needed some "Island Time" today.

Amy, so glad you came by for a breather! You are certainly busy today - thank you for hosting. :0)

Last month, I did a bio on Natasha Trethaway for our poetry meeting. She's an interesting person. I like the poem, "Theories of Time and Space."

I enjoyed visiting Amy's site too.

Hi, Patricia! Yes - very interesting. And from here in Georgia, too. Thanks for the kind words - and Amy's site is full of wonderful things for teachers, students, and writers - I'm not surprised you enjoyed visiting.

Robin, your haiku pretty much sums up my spring this year. I'm going to print it out and put it by my computer. Thank you.

Oh, Katya, thanks for sharing that. Wishing you smooth(er?) sailing as the year progresses.

Love that image of mile-markers ticking off minutes of your life...and gorgeous haiku! Hoping your spring winds shift to some island time this summer.

Hi, Buffy - thanks for coming by! And ha! - I love the way you worded your good wishes. Same backatcha.

I just loved the way all three of your sharings (poems, photograph) blended together to paint a state of mind.

Your haiku is 'timeless' too, Robyn-& from the comments, it seems you've touched many with it. The Trethaway poem is a new idea for me, how when we go somewhere, if only for a short while, we are not the same person upon returning. I've been to islands on vacations before, definitely there is 'island time', no worries, just enjoy the four hour meals & dancing until late, the beach in the am, siesta in the pm. Lovely! Enjoy your island time & make it up as you go along!

I love this poem by Natasha Trethewey. I've been there...to Ship Island. It was for my 40th birthday and it rained buckets. We went anyway and froze in summer from being wet and the wind blowing off the water. I've never written about that crazy trip.
I just got home from "lake time" with my parents in Mississippi. It was wonderful to slow down to old people pace and watch the heron preen himself on the dock.
Hope you get your island time...

I love your haiku and I love the Natasha Trethewey poem, especially that last stanza. Thank you!

Linda, thank you for your as-always thoughtful comments. I will indeed make it up as I/we go along in coming weeks - better for your blessing. Thanks.

Hi, Margaret - thank you for sharing your Ship Island story! (Though I'm sorry the memory is so wet and cold, but I guess that makes it special too.) Happy to hear of your good Mississippi time - wishing you lots of "island time" the rest of the summer.

Ruth, glad you enjoyed, and thanks for coming by. I guess you have lots of island time experience!

Hi Robyn,
I think "Island Time" is exactly why my son is so excited about summer. I will be glad for it too, for all the reasons Jama mentioned. Wishing you many happy summers, whatever the circumstances!

Thank you, Tabatha - and wishing you and yours the same! :0)

Islands and ocean are so foreign to me, but both you and Natasha take me there and help me to experience them!

Thank you, Mary Lee! Having grown up in Florida, I've always felt close to the ocean, even when hours away. :0)