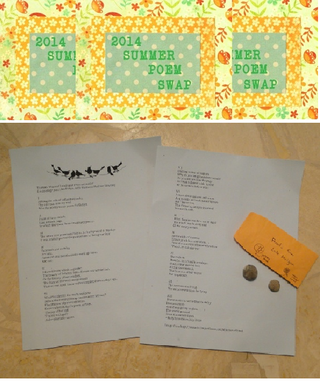 Buffy's poem arrived with the wonderful blackbird graphic (credited below) and a small envelope with two treasures: fossils from Lake Michigan!

During The Summer Poem Swap, I’ve enjoyed a little banter with fellow participant Buffy Silverman about our – um – lack of ability to, technically, meet the deadlines. :0! [Aside: I had the privilege of meeting Buffy a couple of years ago at a Highlights Founders workshop in poetry, along with a few other Poetry Friday-ers. What a treat!]

This deadline business all started with the very first swap poem; I’d noticed a comment Buffy left on another blog with a wee apology that her poem would arrive a little late. I emailed her that her confession gave me comfort, because I was already running behind too! Little did we know we’d be swapping with each other just a couple of rounds later.

And little did I know she could turn that week’s suggested prompt into this poetic series that literally had me laughing out loud. My office cat, May, was in my lap while I read it, and she looked alarmed, wondering what all the fuss was about.

I’m sure you will enjoy Buffy’s offering as much as I did!


Thirteen Ways of Looking at Procrastination
(an apology poem for Robyn, with thanks to Wallace Stevens)


I
Among the pile of unfinished tasks,
The one that tore my soul
Was the poetry-swap poem for Robyn.


II
I was of three minds,
Like a blank page
In which there are three imaginary poems.


III
The unwritten poem whirled in the background of my day.
It was a small part of the pantomime of being a writer.


V.
I do not know which to prefer,
The beauty of Robyn’s poem for me not yet written
Or the beauty of innuendoes,
The busy writer with assignments
That no one need know were completed seven days ago.


VI
Would icicles fill the study window
Before the summer swap poems were written?
The shadow of procrastination
Grows when Robyn’s poem arrives.
The joy of her gift
Traced with guilt
A decipherable cause.


VII
O idling writer of Augusta
Why do you imagine golden words?
Do you not see how the page
Still blank dances with rhythm
Of the writers before you?


VIII
I know about spiders and webs
And nimble, unpredictable rhymes;
But I know, too,
That frittering delay is involved
In what I know.


IX
When the excuses flew out of sight
The words marked the end
Of the empty screen.


X
At the sight of stanzas
Crowing in black and white,
Even the mistress of procrastination
Would cry out sharply.


XI
She rode to
Beaufort in a manila envelope.
Once, a fear pierced her,
In that she mistook
The lateness of her words
For ineptitude.


XII
The neurons are firing.
The missive will soon be flying.


XIII
It was easier to write than to delay.
It was sunrise
And it was going to glow.
The words poured
From the writer’s pen.

Now, don’t procrastinate – get thee hence to this week’s Roundup over at Reflections on the Teche , hosted by the lovely and talented Margaret. (You can see Margaret’s Round One Summer Poem Swap gifts to me here .)

And… BLATENT COMMERCIAL WARNING: If you have a little correspondence to catch up on yourself this summer, I’ve just added a couple of beach-themed note card designs to the artsyletters stable. You can see them on my art blog here.

Oh, the talented Buffy! What a great list of excuses. I may need to borrow a few as I think I am late with round 4.

Thanks for sharing my poem, Robyn, and for making me feel like I am not the only summer slacker. For anyone who wants to read Wallace Stevens' poem "Thirteen Ways of Looking at a Blackbird," you can find it here:
http://www.poetryfoundation.org/poem/174503
(and then maybe someone can explain what the heck it means to me...)

Genius, Buffy! I think we've all been there sometime or other. Love II in particular.

Buffy - what fun. Thanks for letting me share your great poem! Everyone can relate at some time or another. And I've always held my head tilted a bit when reading that Stevens poem.... Somehow it makes more sense as I reread it over the years. Or maybe I'm just making LESS sense! ?!

Tabatha, thanks so much for coming by! I made several attempts to credit/link to you (re. the Swap) in this post last night, and for some reason the whole paragraph would get swallowed up and merged together - your link would disappear. Each time I tried to fix it, more hunks of my post would vanish into cyberspace. No idea. I'm afraid to try any more edits! :0!

Hysterical! Big Big smiles reading this post. :) Love reading how others are enjoying the Summer Poem Swap... it's really a special thing, isn't it? xo

What talented bunch these swappers are! It's certainly something to look forward to every two weeks. Thanks for sharing, Robyn and Buffy.

Wow-I think that I know more than one student who would love to hear these verses, Buffy. I too had lines in the back of my mind, wondering how it would all finally go together. Thanks for sharing this-a support for us all, Robyn!

Love it! Sometimes the best work comes after procrastinating a while.

How wonderful, Buffy! Great poets have a way of inspiring us when the page is blank!

Oh, very wonderful indeed, Buffy--and Robyn, I'm so happy to know that you are both merciful and complicit in this belated swapping, since here it is Friday, August 1st and I have not yet composed, fancified or mailed my next poem. "Who could it be for?" you are wondering. Only be patient and all will be revealed...

Thanks for sharing the poem. I hope you both enjoy the music of language as you write.

Hysterical! The stars aligned that you two would exchange your poems. Thank you so much for sharing Buffy's poem, Robyn. I love the line:
"That frittering delay is involved
In what I know."
because I can relate. =)

Hi, all! Sorry to be out of pocket - "back to college" errands for my youngest today.

Irene - laugher and tears, these swaps have produced! And the gamut in between. :0)

Thanks for coming by, Diane. (Oh - we're supposed to be sending every two weeks? No wonder I'm always behind...!)

Monica - I will absolutely nod to your statement! Not that I'd ever, um, procrastinate...

Joyce - funny how Buffy's own "confession" transforms into inspiration for all of us! :0)

Hi, Patricia - what a lovely way to phrase a comment! And same to you.

Bridget - oh, me too, me too. In fact, I hear some frittering delay calling right about now....

I'm glad I'm not the only one who often lets it get down to the wire...great poem! I find my problem submitting a poem is not so much procrastination as it is an unending, perpetual tinkering of lines - I'm just never sure if I like it or not!

Oh my my my. This is a slice of brilliant pie if ever I tasted one! I love X, those "stanzas/Crowing in black and white." I also happen to love that you have an office cat, Robyn. How purrfect.

Hi, Matt! Thanks for coming by. Yes, yes - reminds me of that Paul Valery quote: "A poem is never finished, only abandoned." or some such!

Michelle - "slice of brilliant pie " - delicious. And yet, I find myself often actually EATING crow about meeting these deadlines... :0!

Oh I can soo relate, Robyn. I didn't mail mine to the next recipient yesterday. Oops.but I so love the summer swap.

Oh, this is fabulous.

What fun! I'm glad all of the poem swappers are so patient -- I've been tardy a time or two, but I don't watch the calendar for when my treasures arrive. I'm just happy to get them. Thanks for sharing this glorious and hilarious gem!

Ruth, wonderful to see your name! Thanks for popping in. Glad you enjoyed Becky's procrastination poetry!

Keri - my first Swap partner! Glad to know even you have been occasionally a wee bit behind. Same here re. being on the receiving end - I don't care when; they just make me happy!

Appreciations for letting us peek into your poem swap.

Appreciations for Buffy Silverman's homage to Wallace Stevens, who I have liked ever since I found my way to his poem, "The Idea of Order in Key West)

Appreciations for Buffy's lines that make me laugh

Much appreciation for YOU, Jan! Thanks for coming by and leaving all these sparkly appreciations. :0)

Hello there dearest Robyn! Thank you for sharing Buffy's poem - love the wit, the candor, the cheeky apology - all perfectly captured! :)

Myra - Hellloooo! Thanks for popping in. Oh that Buffy is a clever one, isn't she? Funny and smart as a whip.

Just got around to reading this delightful post. Poem and post are wonderful as are the artsy notecards. Summer has delighted me and called me to linger in relaxation at times - work later. Here is my take on it: "Summer Captures My Heart While Work Waits" http://beyondliteracylink.blogspot.com/2014/08/summer-captures-my-heart-while-work.html