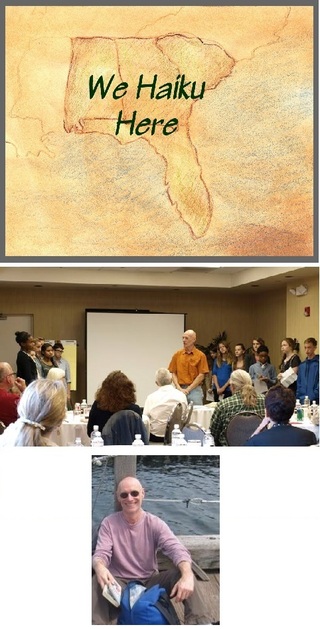 Welcome back, Poetry Friday Friends! Our haiku series continues today. In late October, The Southeast Chapter of The Haiku Society of America met in Atlanta for the 2nd Annual Ginko Haikufest: “gazing at flowers” in celebration of Koboyashi Issa’s 250th birthday. (We’ll revisit Issa in a later post with HSA President and Issa scholar David G. Lanoue.) I’m shining a spotlight on our speakers here, week by week.

Last week, we kicked off the series with North Carolina poet Curtis Dunlap, who kindly provided some thoughts on haiku and several fine poems. This week, I’m thrilled to introduce Tom Painting. (If you already hang in the haiku world, Tom needs no introduction.)

One of the highlights of our recent weekend was welcoming Tom’s current and former students from The Paideia School in Atlanta, where Tom teaches junior high. (He taught my niece Olivia in fact, and she has penned some award-winning haiku, which I’ve featured here the last two years.)

These eighth and ninth graders each shared a few thoughts on haiku and then some of their own poems. I cannot adequately describe how articulate, thoughtful and talented each student was – or the tangible impact they had on us grown-up listeners! There were many moist eyes in the room during the readings. Beyond impressive.

Since 2000, Tom’s junior high and high school students have had winning haiku in the Nicholas Virgilio Memorial Haiku Contest. His students have also been recognized in the United Nations International School Haiku Competition.Tom is obviously an amazing teacher, and he is eager to share his students’ work.

For today, I convinced him to let us meet him first! This teacher, husband and father is one of our best haiku poets writing today.

In addition to regular inclusion in the top haiku journals,Tom’s haiku have appeared annually since 1998 in The Red Moon Anthology of English Language Haiku, published by Red Moon Press. He was the 2012 winner of the Haiku Society of America haibun contest. One of his poems is included in Haiku in English: The First Hundred Years recently published by W.W. Norton and Company (see last week’s post for my aside raves).

Here are some examples of his work:

crickets
the pulse in a hollow
of her neck

spring plowing
a flock of blackbirds
turns inside out

detour
she returns my hand
to the wheel

year's end
the weight of pennies
in the mason jar

Indian summer
bison graze the shadow
of the Bitterroots

summer stars
my children ask me
to name a favorite


Now, to the question, “Why Haiku?” – Tom’s insightful answers runneth over. In fact, I’ll feature just a few of his helpful thoughts about haiku here today and try to work in more in future posts.

“In haiku circles you’ll often hear reference to the haiku moment,” Tom explains. “In so short a form as haiku the poet must get right to the point and show the particular thing that captures her or his attention- the one among the many, the close-up in the general scene, the last, the first, the opposite.

"Haiku work with the ordinary facts of life. One of the great surprises of this form of poetry is that in the ordinary, the every day, one can find the sublime. Haiku poets write in present tense to help the reader feel as if the haiku moment were happening now. Simple, uncomplicated images, common language, objective presentation and musical sensitivity to language are additional hallmarks of a successful haiku."

Told you he was a teacher. As to why he teaches haiku:

Tom even makes his students a promise: “ If you commit yourself to the practice, you’ll learn more about the world, about writing and especially about yourself.”

If you scan the 7th through 12th grade winning entries in the Nicholas A. Virgilio Memorial Haiku Contest at the Haiku Society of America website, you’ll see how Tom has inspired many of the winners.

But wait! There’s more! I will be featuring one of Tom’s students each month beginning one month from today! That’s right, a student haiku poet of the month. You will be blown away, I guarantee it.

The accolades of placing in a contest are all well and good, but beyond that - when a young writer is able to engage in the world in an authentic way and express his or her experience in just a few profound words… I told you you’d be blown away, right? So stay tuned in coming weeks for more haiku from our featured speakers, and then keep circling back for our bright and shining student of the month.

As for today’s Round Up, please go see what the ever-surprising and insightful Jama is cooking up over at Alphabet Soup . It’s always Mmm-mmm good.

Sometimes I wish I was still in the classroom because this is such an inspiring post for teachers, Robyn. I will save it, use it when I can, share with colleagues! I've found all through the years that most of my students savor the poetry, and do learn to slow down and "notice". In their crazy/busy world, it was a special time and some alums returning tell me they are still writing! (I taught middle-school mixed grade for a long time). Thank you for sharing Tom's haiku & his words about them! I especially love the one about the Mason jar of pennies-means something dear to me!

Linda, thank you for slowing down yourself to leave such thoughtful comments. I'm not surprised you planted a seed in many young lives that continues to bear fruit and enrich them (and the world too, I'd imagine). I taught middle school part time a few years ago; it's such an important (and "crazy") passage, isn't it? The influence of special teachers during that time probably can't be measured.

Oh - I loved the mason jar poem as well; glad it has a particular meaning for you. :0)

Wonderful haiku and thoughts on teaching from Tom--thank you for sharing. I'll be back to read the students' work, too!

Hi, Anamaria - I so enjoyed your haiku post today. Thanks for hopping over and see you again soon!

I'm so enjoying this series. Tom's haiku are beautiful. Love learning more about his work with the students.

Thank you, Jama - and thanks for hosting today with your usual flair! Glad you like the student connections, too - stay tuned.... :0)

So much to look forward to! You're doing a great job of spreading the word--I salute you!

Tom is a wonderful poet, teacher and all around great guy. I am proud to have in in our region! Can't wait to read more about his students and their exceptional haiku. Thank you for featuring Tom, Robyn.

So many nice surprises in Tom's haiku. My students like the idea that a haiku is so short. I have a hard time expressing to them the importance of every word. These are some good models. Looking forward to more from the contest winners.

I'm enjoying your series immensely. These poets and their works are helping me get a better grasp of the essence of haiku. (Of course your enthusiasm helps too!)

Terri - we're lucky he moved South! Thanks - I look forward to featuring these great students.

Hi, Margaret - glad you stopped in! I think the form, because of its brevity, is not intimidating to students - so that's good, but there are so many more layers to it than what students (and many adults!) initially realize. I look forward to sharing Tom's students' poetry.

Violet, thank you - so glad you're taking it in! We have some more great poetry yet to come in the next few weeks, and then continuing on into the new year with student work. :0)

Hi, Robyn. I'm enjoying your haiku series. The blackbirds turning inside out -- what a powerful visual image. I love the dual meaning in the last line of the summer stars poem.

Oh Robyn, I know exactly what you mean about poetry reading that leads to quiet surreptitious dabs on one's eye. I was at the Singapore Writers Festival last week and was deeply moved by the poetry reading of one of Singapore's literary icons, Edwin Thumboo as he parried verses with Carol Ann Duffy. Such beauty. And I am reminded of that again as I read your post. Loving your haiku series, Robyn! I hope I can find a "Haiku moment' soon.

Robyn,
Thanks for sharing these. I love the pulse in a hollow/of her neck, the flock turning inside out, the humor of the detour, the bison grazing the shadow. I will look to these as examples when I sit down to write. I also love what he says about teaching haiku.

Thank you, Myra - that sounds like an incredible poetry experience. Continued thoughts and prayers for your side of the world, and I wish for you a haiku moment soon! xo

Hi, Liz - glad you're enjoying! Tom's haiku have so much to offer and teach. Happy composing. :0)

Thanks for featuring Tom's haiku. He makes it look so easy. What a master!

Hi, Marilyn! Master is certainly the right word. Thanks for coming by. :0)

What wonderful poems, Robyn. Tom is a truly gifted poet and a gifted teacher. Quite a combination. Sounds like your conference was really wonderful!

Such wonderful reading today. I am currently working with second graders in haiku. the teacher and I are going to not focus on the traditional method we have taught so long in school. it is fun and exciting.

Your post makes me want to be one of his students! Thank you for sharing Tom & his work.

There is a lot to be learned from a teacher like that. Incredible work! I'm so looking forward to your student haiku poet series too. :)