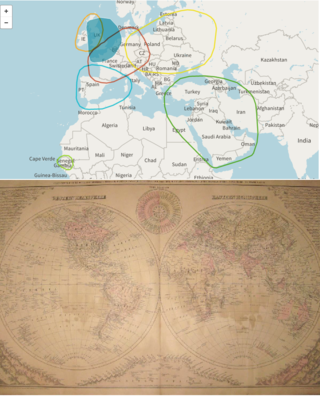 Top: Ancestry.com map; bottom: 1885 world map.
As Christmas gifts, my husband and I bought Ancestry.com DNA testing kits for our kids, our new son-in-law, and ourselves, with the promise of a future trip to some ancestral turf. We spit in vials over Thanksgiving weekend, and I shipped them all off together. Before Christmas, results called from our inboxes.

We’ll be headed to Great Britain it seems, as that’s our main stock –Scotland primarily with the family trees I’ve found on my side (which pleases my Outlander fan daughter). There are some Irish roots among us, too (who knew my hubby was almost a quarter Irish?), and some Western Europe, Finland/Northwest Russia, Scandinavia, Italy/Greece, Iberian Peninsula and European Jew.

While most of their tests came back 100 percent European, mine was 98 percent. The other two percent? Middle East (1 percent) and Senegal (1 percent). Knock me over with a feather. Because of family stories, I was expecting some Native American in there somewhere, but apparently not.

I’m thrilled to possess some drops of diversity in my personal genetic cocktail. This knowledge led to much immediate consideration, and questions. As a white woman who has never borne the burden of racial discrimination, I wondered about distant ancestors… Senegal was a notorious gateway for the slave trade from the 16th through 19th centuries.

We now live in a small Southern seacoast town brimming with history. The first European settlement in the country, though it didn’t last, was on Parris Island. Downtown Beaufort boasts many antebellum homes, still standing because when the Union showed up in 1861, landowners simply fled.

Just across the bridge to the Sea Islands, you can still explore Gullah culture in food, art, and at The Penn Center , a treasure of African American history. Founded in 1862 as a school for freed slaves, the site was also used as a meeting and retreat center by Dr. Martin Luther King Jr. and the Southern Christian Leadership Conference.

While visiting the small museum there with a friend a year or so ago, we wondered about an object on display. I thought initially it was something used with livestock. She figured it out before I did - shackles. I’d never seen them in person before.

On that day, I felt sad and sobered, but not personally connected to that history. I never had to live it. But now I wonder if, perhaps, an ancestor long ago did.


In President Obama’s moving farewell address this week, he said, “Regardless of the station we occupy, we all have to try harder.”

He also said, “I reject discrimination against Muslim Americans who are just as patriotic as we are.”


one percent
still a thousand drops
of blood


Recently I visited with a brave and thoughtful family member, and the subject of a ban on Muslims, proposed by the incoming President during his campaign, surfaced.

“If there’s a ban on Muslims,” he said with a wry smile, “we’ll all register as Muslims.”

Big thanks to the wonderful Keri rounding up Poetry Friday this week at Keri Recommends. Enjoy the offerings!

What a thought-provoking experience you've had! Your initial poetic responses are incredibly powerful. I love the idea of doing the DNA project as a family with the goal of traveling. You'll have so much to share with us as you journey around the globe!

Thanks, Keri - and thank you for hosting this week!

Scotland is a wonderful place to visit -- I look forward to reading poems about it!

Yes, Amen to that.

May we all embrace our own heritages, down to the last drop. Europeans were not without mixes, too, by the way. The Moors and Turks mingled all over Europe. I think humans are always getting irritated with each other and migrating. :-) I'm a product of that.

Isn't ancestry fascinating? The truth of it is that we're all related, when it comes down to it - if only we could all remember that!

I keep seeing those ads, and now I know someone "real" who did send for their DNA results. How wonderful to hear all that news, and for you to think about that long ago ancestor and then write-wonderful. FYI-I've already signed a pledge that I would sign as Muslim if it comes to that. What a time we are having, will continue to have I'm sure. I won't quit fighting! Thanks, Robyn.

I'm so glad for all the diversity in your heritage, it has made you the wonderfully fabulous person you are. Thank you for sharing your haiku.

Thank you for sharing your DNA experience, Robyn! Identity is a funny thing, isn't it? Constantly shifting as we learn more, experience more, grow...keep the poems coming! xo

Thank you for sharing your experience with your DNA discoveries. I wonder as more people take part, if our thinking and discussions about diversity will change? Will more people, like you, discover a personal connection to history that impacts how we move forward from today? I can only hope. I love the idea of traveling, too!

Hi, Brenda - Funny and true way to put it, " always getting irritated with each other and migrating." Let's hope we can keep figuring out how to co-exist! Thanks for coming by.

Agreed, Jane - As Bono says, it's a "family fight." Sigh. Thanks for weighing in!

Linda, I always want to be on your side of any fight. ;0). I'm not surprised you've already taken such a stand.

Merci, Dear Joy. Thanks for sharing all the light you do in the world.

Irene, well put. I always turn to poetry of one kind or another in those big shift times!

Hi, Kay - beautifully worded; I'm hoping right along with you!

Landscapes shift, Robyn, and identities surface. As being committed to urban education, I have always been a proponent of diversity. It is amazing how there are distinctions in the term American these days. I often thought of tracing my roots. You not only did that but wrote poetry to illustrate your feelings. Happy Traveling!

The United States is truly a melting pot, as are many parts of the world today - some more than others. There are surprises for everyone, I'm sure. We are who we are and can only do what WE can do, regardless of our ancestors now. I can't ask forgiveness for things I did not do, just as I cannot take credit for what has gone on before. It's time to just do our parts. I love genealogy, visiting cemeteries, and thinking about what could have been if some paths had been altered. All in all, it's good to be in the shoes I own! And if the paths HAD been altered, I wouldn't be here... Glad you are here!

Amen. On all that you've posted, Robyn. Appreciations.

I can't quite recall the story, but it seems to me that in a small place in Italy during WWII or perhaps it was Greece, the town would not give up the Jewish residents, who had felt into the mountains in advance of the Nazis, in a similar fashion. The town clerk or other official was asked for the names of the Jews. He wouldn't give it. The Nazis said they would be back for it & there would be difficult consequences. When they came back, the official gave them a list of names. All names but those of the Jewish residents. Don't quote me on this, because I dot have a source for it n't it's a story that

Please excuse the typos in the above.
Must give away the lap cat!

I see the ads for the Ancestry DNA kits all the time but have never met anyone who actually took the test. I'm curious about how it works (not that I'd understand it if someone explained it to me). If one's knowledge of long-ago ancestors has such power to change how one feels about oneself, I can't help but have great sympathy for children who are adopted and want to know about their much more immediate ancestry.

Amen and Amen. Robyn what a beautiful and heartfelt post. I love that you included your son-in-law and that your response to this family gift is poetry. We are all so curious about what makes us. I so look forward to what your journies uncover for you in the way you respond and share. Thank you in advance.

Fascinating. Makes me want to do it!

You should read Marilyn Nelson's American Ace. It bears remarkable similarity to your experience.

Thanks, Carol, for coming by and adding your fine perspective to the conversation. So many voices we all can learn from, aren't there?

Donna, Oh - I'd love to meander through cemeteries with you. I got that from my mom for sure; she's always been curious about the stories they tell. Glad YOU are here, too!

Jan, thanks for sharing that story. I can only imagine the acts of noble character that might or might not have made it into stories during such dark and frightening days. Of course, those occur in many parts of the world today, too. [And - blessings to your cat. One of ours likes to "contribute" to my computer ramblings as well....]

Hi, Violet - I've wondered about how the widespread availability of DNA testing now might affect those who are adopted, too. Perhaps some will welcome the option, though I respect that lots of folks prefer not to take that route. I think different companies offer various kinds (and timelines) of information.

Thank you, Linda, for the kind words. "We are all so curious about what makes us" - lovely. We find clues in the arts (like poetry!) as well as science, don't we?

Hi, Mary Lee - I must put that Marilyn Nelson book on my list. Thanks for chiming in!

I cannot tell you how intrigued I am by this whole conversation about DNA testing. The idea of giving it as a joint Christmas gift has me wishing for December 2017 already, despite the fact that most of the time I'd prefer to skip the season altogether.

Hi, Robyn! I got the same gift for my family and somehow we can't get around to spitting in the tubes! It will be interesting for us because both kids come from different anonymous donors. Your two haiku are just as they should be, both light and deep, and your reflections are good reminders...

Heidi, it will be an especially fascinating adventure in your family, won't it? Celebration worthy - :0) Hope all of you are having a great start to the new year.