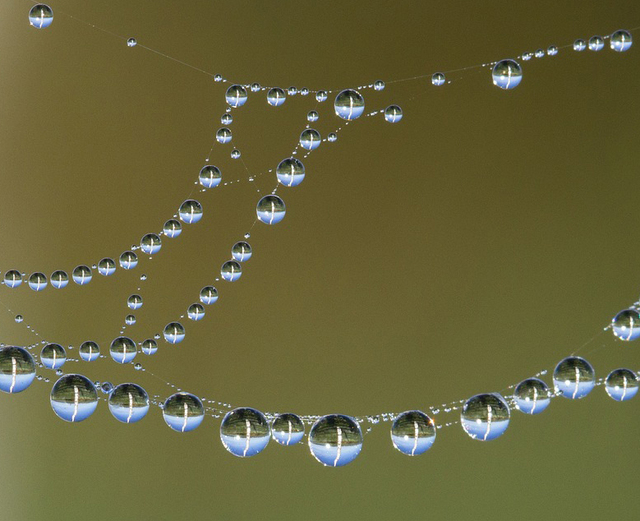 Detail of image by Heiko Stein on Pixabay.

Greetings, Poetry Lovers - Here's to the last Poetry Friday of Poetry Month, a bonus fifth one this year! :0)  I hope the full moon has smiled on you this week.

Thank you for deliving into dewdrops over here this month with recently translated Issa haiku from Dr. David G. Lanoue, author, poet, professor, musician, former Haiku Society of America president, and Issa scholar. And many thanks to David for allowing me to share these gems.  Learn more about David here, and more about Kobayashi Issa (1763-1828) here , as well as through David's many wonderful books!

During pandemic lockdown, David decided to add to his 10,000-plus Issa haiku translation archive by translating several hundred more poems, on various themes.  One of these themes was dewdrops, and I fell in love with these haiku and wanted to share them, with David's kind permission.  Remember, you can search David's translations of Issa haiku on a variety of topics using the online tool here, and you can follow along on Twitter here to read a different Issa poem each day.

The first post in my Poetry Month blog series was an introduction to David, Issa, and dewdrops; the second focused on 'pearls' of dewdrop haiku; the third on humorous Issa dewdrop haiku; and the fourth on more dewdrop poems with some cicadas thrown in, in light of Brood X. For today's post, I wanted to share a few of the translations with a decidedly spiritual bent, as Issa's poems about "this dewdrop world" are inextricably connected to his devotion to Pure Land Buddhism.

For a much deeper discussion of these matters, you can read David's 2008 article in The Eastern Buddhist, "The Haiku Mind," on JSTOR. [Lanoue, David G. "The Haiku Mind: Issa and Pure Land Buddhism." The Eastern Buddhist, vol. 39, no. 2, 2008, pp. 159–176. JSTOR, www.jstor.org/stable/44362411.] In it, he describes Issa's perspectives on Paradise, which also describe his poetry:  "Amida Buddha's Paradise is revealed when one opens one's heart to nature - looking, listening, and deeply appreciatating."

Here are some treasures from David's archives, with his commentary following the poems:

in morning dew
a reaching-the-Pure-Land
lesson

The shimmering dewdrops are telling the truth about life (from a Buddhist perspective): nothing abides.

Dewdrops experience (in Issa's imagination) the brevity of life--a key insight of Buddhism.

Issa is referring to reincarnation. The way the dewdrops make trees and grass sparkle, he wouldn't mind being reborn as one of them.

In a presentation on Issa's dewdrop haiku last fall, David noted that:

--Awareness of the dewdrop nature of life is part of the DNA of haiku.
--Issa explored this theme of transience (Japanese: 無常 mujô).
--No haiku poet in history has ever devoted more attention to this theme. ...

The "Great Thing" (daiji) in Pure Land Buddhism is Amida Buddha's vow to make enlightenment possible for all beings who trust in his "Other Power." Here, Issa is using the expression "floating world" (ukiyo) in its old Buddhist sense of the world being temporary and imperfect.

In correspondence with me about these haiku, David added:

"The dewdrop haiku, I believe, represent Issa's most important image--at the core of his philosophy."

MUCH appreciation to David for his generosity in allowing me to share his work here this month.  It's a dewdrop world, as Issa said - and we will soon enough move on like dew ourselves - but poetry offers such meaning and beauty along the way, doesn't it?

Thank you for joining me on this Poetry Month dewdropping journey.

To cap off April's Poetry Friday celebrations, Matt has the Roundup at Radio, Rhythm & Rhyme.  Thanks, Matt!

[Note: We will be busy with a family wedding this weekend; thank you for your comments, which I always delight in reading, though I  might not be able to respond right away today/romorrow. In fact, we have several family celebrations in May, so I will likely take a mini-Poetry-Friday-break or two this month to catch up on custom artsyletters orders and ready my shop for re-opening in person in June. But let the poetry continue, long past Poetry Month! I'll be in and out and back soon. :0) ]

Some breathtaking imagery here, Robyn. Thank you so much for sharing.

--Thanks for coming over, Sally - these poems still sparkle after 200 years!

Robyn, I have so enjoyed your series. Thank you. I am delighted with how haiku slows me down with the image descriptions. The haiku shared today are stunning. Just think, we walk over dewdrops and there's just so much there for us to appreciate as we step. I've so enjoyed Poetry Month with you. I'm looking forward to a restful May. You?

I've really been enjoying these, Robyn...so beautiful, and each one forces the reader to contemplate not only what the poet is saying, but how we should react to it. Thank you for sharing!

It's been delightful to get this introduction to Issa's poetry. I've enjoyed reading so many haiku exploring the same subject.

Best wishes to the happy couple and thanks for your blog posts!

--Hi, Linda - it's been such a treat having you chime in this month! Thanks so much for coming along. Issa's poems can be revisited and revisited - simple but profound, with much to ponder. Happy May! (We have several road trips, so not sure about the restful part over here... but we're grateful to celebrate a wedding, a milestone birthday, our son's grad school graduation, and a belated 'holiday' gathering for my hubby's family!)

--So glad you've enjoyed, Matt - thank you for popping in this month. And BIG thanks for hosting the Roundup this week!

--Hi, Elisabeth - many thanks for visiting, and I'm happy you've enjoyed our exploration! It's fun to type in a subject over at David's Issa archives page and see what comes up - how many different angles an image/idea can offer. :0)

It has been a special journey with David's commentary & Issa's writing, Robyn. I am grateful that you created the time & posted so many to think about & to learn from (I hope!) Have a wonderful time ahead with all those gatherings!

Thanks for sharing your dewdrops--I've really enjoyed the haiku commentary this month. So interesting to read again after reading David's words.

Just lovely, Robyn. I especially like the one about reincarnation. Thank you (and David!) for sharing Issa's beautiful world. Enjoy all of your family celebrations over the next month!

I have loved your posts, Robyn and hope to return to them again and again, to ponder the meaning, the transience, of dew drops.

Robyn, thank you for the series you presented during Poetry Month. I am in awe of the haiku translations and how they give such a beautiful interpretation of life. Enjoy your family outings and the re-opening of your shop.

Thank you for sharing these dewdrop treasures and the insightful commentary, Robyn! Enjoy your family time!

I always learn so much from your posts, Robyn. Thank you for all you do to enlighten us.

I have enjoyed these all month. Thanks, Robyn!

I've been so busy writing poems I haven't done much reading this month! Read these makes me want to go back and read the rest of this series! They are beautiful! Thank you!

Hi, Dear Friends - my apologies for not responding individually to each comment this past week; been in and out of town and extra busy in the shop. But THANK YOU for your support of our Issa Dewdrops journey! I appreciate every thoughtful insight and response. Here's to an inspired May! XO